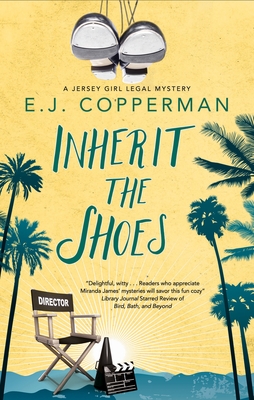 Lawyer Sandy Moss gets mixed up in a celebrity murder case in LA, in the first in a brand-new cosy legal mystery series. New Jersey prosecutor Sandy Moss is tired of petty criminals, and a new job at a glitzy Los Angeles law firm seems the perfect career move. Putting 3,000 miles between her and her ex-boyfriend is just an added bonus. But on Sandy's first morning as a family attorney, she inadvertently kills her new career stone dead when she offends her boss during a meeting with the firm's top celebrity client, charismatic TV star Patrick McNabb. But that's not as dead as Patrick's soon-to-be ex-wife, Patsy, is that evening, when she's discovered shot by an arrow, her husband standing over her. Did Patrick really kill his wife in a dispute over a pair of shoes? All signs point to yes. But Patrick is determined to clear his name, using all the legal skills he's learned from playing a lawyer on TV, and to Sandy's deep dismay, she's the only person he'll allow to help . . .

E.J. Copperman is the nom de plume for Jeff Cohen, a New Jersey native and writer of intentionally funny murder mysteries. As E.J., he writes the Haunted Guesthouse and Agent to the Paws series, as well as the brand-new Jersey Girl Legal mysteries; as Jeff, he writes the Double Feature and Aaron Tucker series; and he collaborates with himself on the Samuel Hoenig Asperger's mysteries.