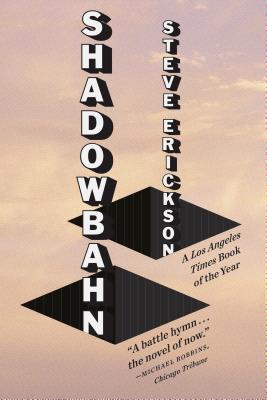 When the Twin Towers suddenly reappear in the Badlands of South Dakota two decades after their fall, nobody can explain their return. To the tens of thousands drawn to the “American Stonehenge” — including Parker and Zema, siblings driving from L.A. to Michigan — the Towers seem to sing, even as everybody hears a different song. And on the ninety-third floor of the South Tower, Jesse Presley, the stillborn twin of the most famous singer who ever lived, suddenly awakes. Over the days and months and years to come, he’s driven mad by a voice in his head that sounds like his but isn’t, and by the memory of a country where he survived in his brother’s place.
So begins Shadowbahn, a kaleidoscopic, musical road-trip across the dreamscape of American destiny. Original and fearless in vision and form, Steve Erickson’s novel speaks to our current times, and to a nation “defiling its own great idea . . . the moment that idea was born.”

Steve Erickson is the author of nine other novels (including Zeroville, Our Ecstatic Days, and These Dreams of You) and two nonfiction books that have been published in ten languages. His work has appeared in numerous periodicals, such as Esquire, Rolling Stone, Smithsonian, American Prospect, and Los Angeles, for which he writes regularly about film, music, and television. Erickson is the recipient of a Guggenheim Fellowship, the American Academy of Arts and Letters Award in Literature, and the Lannan Lifetime Achievement Award. Currently he teaches at the University of California, Riverside.

“Steve Erickson’s novel is: compassionate, weird, unpredictable, jaunty. It’s sad, and it’s droll and sometimes it’s gorgeous … In this novel, Erickson has mobilized so much of what feels pressing and urgent about the fractured state of the country in a way that feels fresh and not entirely hopeless, if only because the exercise of art in opposition to complacent thought can never be hopeless … In 2017, it reads like an answer to and sanctuary from the American Century to come.”
Fiona Maazel, New York Times Book Review

"Shadowbahn [is] the best kind of experiment: provocative throughout, alive with laughter and surprising in the ways it stirs the heart."
John Domini, The Washington Post

“Erickson was postmillennial long before the millennium ever got here…Shadowbahn grabs hold of its narrative idea early and never lets it go...its concerns are as genuine as its characters -- believable people traveling through a degenerating political landscape while trying to remember how they got to where they are before they reach the end of the road.”
Scott Bradfield, The Los Angeles Times

"Shadowbahn will be an epoch-defining book in Trump’s America. It’s an American Heart of Darkness almost by accident."
Chris Vaughan, The Rumpus

"The novel of now… the first novel of the Trump era. [Erickson] has written a battle hymn."
Michael Robbins, The Chicago Tribune

“Staggering. This is a book in which the vastness of American ambition and dreaming can take your breath away and then, only a few lines later, make you tremble with the sense that we are always living a hair’s breadth away from catastrophe. Shadowbahn filled me with exultation and terror.”
Charles Taylor, Los Angeles Review of Books

"A book like Shadowbahn serves as a bulwark against numbness and the dangerous belief that the only response to incomprehensibility is inaction."
David Leo Rice, The Believer

"Erickson is an author for whom national tragedies are things with which to wrestle from an unexpected angle — and the results are almost always searing, haunting, and immeasurably powerful…In going to places few other writers touch, Erickson explores uncomfortable questions with an eye towards a greater moment of revelation."
Tobias Carroll

"Shadowbahn is an experience as much as a book—a guided dream, maybe, or a trip through various emotions more than through plot points."
Samantha Holloway, New York Journal of Books

"Unusually structured and daringly written, Erickson’s gem of a novel is equally challenging and rewarding, spinning out thread after thread of story before skillfully tying them together in a satisfying climax."
Publishers Weekly

"Think Philip K. Dick on smoother acid and with a more up-to-date soundtrack, and you've got something of this eminently strange, thoroughly excellent book."
Kirkus (starred review)

"Steve Erickson is one of America’s greatest living novelists. Wild, inventive and surprising, Shadowbahn combines the social novel, science-fiction novel, and family novel."
Dana Spiotta, author of Innocents and Others

"A great, great, great, great novel.  I could say more—about its big-world heartedness and old-world shadowness, about twins and towers, brothers and sisters, road trips and borders we design and transgress, and mostly about Erickson’s beautiful heart-bit music—and it would add up to the same thing: great.  Sung, of course."
Mark Z. Danielewski, author of The Familiar

"Who else but Steve Erickson could have imagined the hallucinatory composites that fill Shadowbahn? History is shadowed by sparkling possibilities, dreams become reality, and reality returns us to the music, the dangers, the beauty and whimsy of the past, all converging with a force no reader will resist."
Joanna Scott, author of De Potter’s Grand Tour

"Shadowbahn has a simultaneous weight and lightness, mapping out a counter-history where events that have touched all Americans are given new shape and speak in new voices."
Greil Marcus, author of Lipstick Traces

"Devastating, perceptive, brilliant, written in the margins of the American songbook and the shadow of the Twin Towers….Erickson is among the handful of essential American novelists. His books are great unravelings, exposing the deepest enigmas of the American experience."
Christopher Sorrentino, author of The Fugitives

"Every time I open a Steve Erickson novel, I am whirled into a hundred layers of story—of the stories no one else imagines—and I can’t put it down.  This time, the Twin Towers and the Badlands: What could be more American, and more of the world?"
Susan Straight, author of Highwire Moon

"Not sure whether Steve Erickson's off-kilter whoppers have gotten more plausible or the country gets more and more unhinged.  He and his book's bewitching nouns, from the Badlands to "La Bamba," are good company either way."
Sarah Vowell, author of Lafayette in the Somewhat United States

"Shadowbahn is adventure, romp, exploration, an act of faith, dangerous, funny, upsetting, certain to annoy the complacent (literary and otherwise), and imparts the uneasy sensation that you’re not reading it, it’s reading you."
Michael Ventura, author of The Zoo Where You’re Fed to God