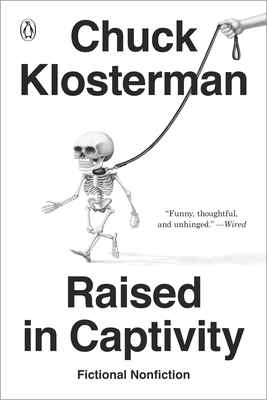 Microdoses of the straight dope, stories so true they had to be wrapped in fiction for our own protection, from the best-selling author of But What if We're Wrong?

A man flying first class discovers a puma in the lavatory. A new coach of a small-town Oklahoma high school football team installs an offense comprised of only one, very special, play. A man explains to the police why he told the employee of his local bodega that his colleague looked like the lead singer of Depeche Mode, a statement that may or may not have led in some way to a violent crime. A college professor discusses with his friend his difficulties with the new generation of students. An obscure power pop band wrestles with its new-found fame when its song "Blizzard of Summer" becomes an anthem for white supremacists. A couple considers getting a medical procedure that will transfer the pain of childbirth from the woman to her husband. A woman interviews a hit man about killing her husband but is shocked by the method he proposes. A man is recruited to join a secret government research team investigating why coin flips are no longer exactly 50/50. A man sees a whale struck by lightning, and knows that everything about his life has to change. A lawyer grapples with the unintended side effects of a veterinarian's rabies vaccination.

Fair warning: Raised in Captivity does not slot into a smooth preexisting groove. If Saul Steinberg and Italo Calvino had adopted a child from a Romanian orphanage and raised him on Gary Larsen and Thomas Bernhard, he would still be nothing like Chuck Klosterman. They might be good company, though. Funny, wise and weird in equal measure, Raised in Captivity bids fair to be one of the most original and exciting story collections in recent memory, a fever graph of our deepest unvoiced hopes, fears and preoccupations. Ceaselessly inventive, hostile to corniness in all its forms, and mean only to the things that really deserve it, it marks a cosmic leap forward for one of our most consistently interesting writers.

Chuck Klosterman is the bestselling author of eight nonfiction books (including Sex, Drugs, and Cocoa Puffs; I Wear the Black Hat; But What If We're Wrong?; and Killing Yourself to Live) and two novels (Downtown Owl and The Visible Man). He has written for The New York Times, The Washington Post, GQ, Esquire, Spin, The Guardian, The Believer, Billboard, The A.V. Club, and ESPN. Klosterman served as the Ethicist for The New York Times Magazine for three years, appeared as himself in the LCD Soundsystem documentary Shut Up and Play the Hits, and was an original founder of the website Grantland with Bill Simmons.

“Extends [Klosterman’s] trademark curiosity and whirring intelligence to the realm of fiction. . . . The effect of these almost scrollable-length stories is at once familiar and uncanny. It feels like a replication of the fractured way we are forced, in the age of technology, to mediate reality and attempt to understand the world around us.” —TIME

“This is the kind of strange, sharply detailed and often slyly funny examination of cultural behavior and norms [Klosterman] does unlike anyone else. . . . Consider these stories the products of the kind of specific, unexpectedly divergent conversations that can come up between old friends as the hours grow late.” —Los Angeles Times

"Raised in Captivity is a short-order short story collection, a series of skits cooked up for the here and now. . . . As soon as one’s adjusted to [Klosterman's] latest 'Twilight Zone,' he's already taken it to its pithy conclusion. It’s a quick-draw approach that plays to his strengths as a stylist and comic. . . . An engagingly sardonic collection." —The Washington Post

“Most of these stories suck you in right away with a perfect opening sentence. . . . Five to seven minutes later, you’re laughing or looking under your bed. Then it’s on to the next one before the fizz from the first stops tingling in your brain. . . . This is Chuck Klosterman at his best. Raised in Captivity combines social criticism with pop culture commentary and is highly recommended.” —Associated Press

“Raised in Captivity is as funny, thoughtful, and unhinged as it is slightly uncomfortable to read, and if that isn't the ethos of the current pop culture moment, what is?” —Wired

“Pure Klosterman, all of it. . . . Raised in Captivity is a fun, fast-moving collection of quick hits. No one looks at the world quite like Chuck Klosterman does; for him to turn that vision in a slightly different direction is a welcome change.” —The Maine Edge

“A series of fictional frameworks through which Klosterman is able to examine the madness and minutiae of everyday lives. He isn't prone to definitive conclusions, but Klosterman thrives within the auspices of the unknown, making this collection a worthy addition to his peculiar and impressive legacy.” —Shelf Awareness, starred review

“Mr. Klosterman’s stories gleefully skewer contemporary human behavior with the sharpest metaphorical sticks he can find. . . . Readers who already enjoy Mr. Klosterman’s writing will happily devour this sizzling plate of sacred cow, and those who can laugh in the face of despair will find both validation and tonic in its pages. . . . Highly recommended for sophisticated readers who aren’t afraid of cutting themselves on the edge of contemporary literature.” —Pittsburgh Post-Gazette

“A cluster of surreal short stories, with subjects including but not limited to: a mountain lion in an airplane bathroom, a man who ponders a procedure that would allow him to experience his wife’s childbirth pain for her, and a classified operation assessing why coin clips no longer have 50/50 odds. Bizarre? Yes. Entertaining? Absolutely.” —Men’s Health

“A multitude of clever scenarios. . . . In these 34 stories, most featuring a hilarious denouement, [Klosterman] takes on racism, diets, cults, white privilege, and life with Trump as president. . . . No matter the topic, Klosterman’s gimlet eye and trenchant prose bedazzle.” —Publishers Weekly

“Klosterman, one the most distinctive contemporary writers of nonfiction and fiction, presents a collection of very short stories . . . a delightful grab-bag of ideas, characters, and fantastical plots, all in prose that jumps off the page. . . . [T]hese vignettes, often with Twilight Zone- or Black Mirror-like premises, are both profoundly weird and weirdly profound. . . . [Raised in Captivity] is moving, funny, and ceaselessly entertaining.” —Booklist

“Acidly funny. . . . Armed with everything from existential crises to a robot dinosaur, there’s really something for everyone in this crisp collection of imaginative snippets. A colorful, somewhat wicked collection of stories that are touching as often as they are laugh-out-loud funny.” —Kirkus Reviews