American Fascists: The Christian Right and the War on America (Paperback) 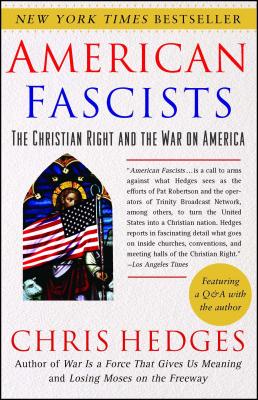 Twenty-five years ago, when Pat Robertson and other radio and televangelists first spoke of the United States becoming a Christian nation that would build a global Christian empire, it was hard to take such hyperbolic rhetoric seriously. Today, such language no longer sounds like hyperbole but poses, instead, a very real threat to our freedom and our way of life. In American Fascists, Chris Hedges, veteran journalist and author of the National Book Award finalist War Is a Force That Gives Us Meaning, challenges the Christian Right's religious legitimacy and argues that at its core it is a mass movement fueled by unbridled nationalism and a hatred for the open society.

Hedges, who grew up in rural parishes in upstate New York where his father was a Presbyterian pastor, attacks the movement as someone steeped in the Bible and Christian tradition. He points to the hundreds of senators and members of Congress who have earned between 80 and 100 percent approval ratings from the three most influential Christian Right advocacy groups as one of many signs that the movement is burrowing deep inside the American government to subvert it. The movement's call to dismantle the wall between church and state and the intolerance it preaches against all who do not conform to its warped vision of a Christian America are pumped into tens of millions of American homes through Christian television and radio stations, as well as reinforced through the curriculum in Christian schools. The movement's yearning for apocalyptic violence and its assault on dispassionate, intellectual inquiry are laying the foundation for a new, frightening America.

American Fascists, which includes interviews and coverage of events such as pro-life rallies and weeklong classes on conversion techniques, examines the movement's origins, its driving motivations and its dark ideological underpinnings. Hedges argues that the movement currently resembles the young fascist movements in Italy and Germany in the 1920s and '30s, movements that often masked the full extent of their drive for totalitarianism and were willing to make concessions until they achieved unrivaled power. The Christian Right, like these early fascist movements, does not openly call for dictatorship, nor does it use

physical violence to suppress opposition. In short, the movement is not yet revolutionary. But the ideological architecture of a Christian fascism is being cemented in place. The movement has roused its followers to a fever pitch of despair and fury. All it will take, Hedges writes, is one more national crisis on the order of September 11 for the Christian Right to make a concerted drive to destroy American democracy. The movement awaits a crisis. At that moment they will reveal themselves for what they truly are -- the American heirs to fascism. Hedges issues a potent, impassioned warning. We face an imminent threat. His book reminds us of the dangers liberal, democratic societies face when they tolerate the intolerant.

Chris Hedges is a Pulitzer Prize–winning journalist who was a foreign correspondent and bureau chief in the Middle East and the Balkans for fifteen years for The New York Times. He previously worked overseas for The Dallas Morning News, The Christian Science Monitor, and NPR. He is host of the Emmy Award­–nominated RT America show On Contact. Hedges, who holds a Master of Divinity from Harvard University, is the author of numerous books, and was a National Book Critics Circle finalist for War Is a Force That Gives Us Meaning. He has taught at Columbia University, New York University, Princeton University, and the University of Toronto. He has taught college credit courses through Rutgers University in the New Jersey prison system since 2013.

"Chris Hedges may be the most credible figure yet to detect real-life fascism in the Red America of megachurches, gay-marriage bans and Left Behind books. American Facists is at its most daring when it enunciates...the perversities that are obvious to those of us not beholden to political exigencies." -- New York Observer

"Throughout, Hedges documents, and reflects on, what he feels is the bigotry, the homophobia, the fanaticism -- and the deeply un-Christian ideology -- that pose clear and present danger in our previous and fragile republic." -- O, the Oprah magazine

"This is a powerful book that looks inside some of the darkest movements on American soil." -- Time Out New York