Fatal Forecast: An Incredible True Tale of Disaster and Survival at Sea (Paperback) 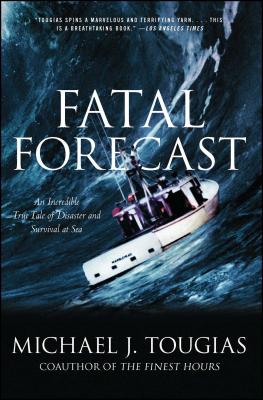 Now in paperback, a true story as spellbinding and harrowing as The Perfect Storm, “marvel- ous and terrifying” (Los Angeles Times)—published to herald the arrival of Tougias’s new hardcover, The Finest Hours.

On   the   morning   of November  21,  1980, two  small  boats  set out  for  Georges  Bank,  a  lucrative but perilous lobster fishing ground off the coast of Cape Cod. The National Weather Service had forecast typical fall weather, and the young, rugged crewmen aboard the Sea Fever and the Fair Wind had no reason to expect that this trip would be any different from the dozens they’d made earlier in the season. But the only weather buoy in the area was malfunctioning, and the National Weather Service had failed to reveal this critical detail. And as the two small boats headed out to sea, a colossal storm was brewing to the southeast, a furious maelstrom that would batter the boats with sixty-foot waves and hurricane-force winds. A true story of catastrophe and survival at sea, this is a vivid moment-by-moment account of seventy-two hours in the lives of eight young fishermen. Most amazing is the story of Ernie Hazzard, who spent more than fifty terrifying hours adrift on the stormy open sea.

Gripping and heart-pounding, Fatal Forecast is an unfor- gettable true story about the collision of two spectacular forces: the brutality of nature and the human will to survive.

"Deserves a place as a classic survival at sea." -- The Boston Globe