On the Arab-Jew, Palestine, and Other Displacements: Selected Writings of Ella Shohat (Hardcover) 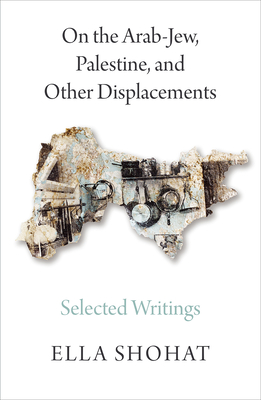 By Ella Shohat
Email or call for price

Defying the binary and Eurocentric view of the Israeli-Palestinian conflict, Ella Shohat’s work, as a whole, dares to engage the deeper historical and cultural questions swirling around colonialism, Orientalism, and nationalism. Spanning several decades, Shohat’s work has introduced conceptual frameworks that have fundamentally challenged the conventional understandings of Arabs and Jews, Palestine, Zionism, and the Middle East. Collected now in a single volume, this book gathers together some of her most influential political essays, interviews, speeches, testimonies, and memoirs for the first time.

As a renowned academic, orator, and activist, Shohat’s work unpacks complexly fraught issues: anomalies of the national and colonial in Zionist discourse; narrating of Jewish pasts in Muslim spaces; links and distinctions between the expulsion of Palestinians during the 1948 war and the dislocation of Arab-Jews; traumatic memories triggered by partition and border-crossing; echoes within Islamophobia of the anti-Semitic figure of the Jew; and efforts to imagine a possible united and peaceful future. Shohat’s trans-disciplinary perspective illuminates the contemporary cultural politics in and around the Middle East. A transdisciplinary work engaging history, literature, sociology, film, media, and cultural studies, Selected Writings offers a vivid sense of Shohat’s unique intellectual journey and field-defining career.

Ella Shohat, an Arab-Jew of a Baghdadi family now living in New York, is professor of cultural studies at New York University and the author of Israeli Cinema: East/West and the Politics of Representation and Taboo Memories, Diasporic Voices, amongst many other works.

“Shohat’s writings have a breadth that is sadly lacking in the left academy today, where most Marxist or radical academics don’t stray far from their narrow scholastic concentration. . . . A profoundly important collection.”
— Counterpunch

"Authoritative, knowledgeable and fascinating, this collection of Shohat's writings composed over the last thirty-five years is an essential addition to understanding the nature of Israel and the conflict its establishment has created, not just for Palestinians but also for the Mizrahi or 'Arab Jews'. Her expert account of the history and culture of this community, the majority in Israel today, will educate many readers, and the parallels she draws between the Palestinian and Mizrahi experience of dislocation and trauma at the hands of a European colonialist project led by western or Ashkenazi Jews that discriminates against them both are poignant and thought-provoking."
— Ghada Karmi, author of Return: A Palestinian Memoir

"In this rich and wide-ranging collection, Shohat demonstrates subtlety, imagination, and the potential of engaged writing. Although it probes many aspects of loss and dislocation, this work is sustained, in the end, by a profound sense of hope."
— Ahdaf Soueif, author of Cairo: Memoir of a City Transformed

"Shohat is a gifted cultural critic who writes about complex issues with great clarity, wisdom, and insight. In this collection of essays she tackles a wide range of Middle Eastern topics from a refreshingly original and radical perspective. She is a wrecking-ball of Zionist orthodoxies. Her work is both profound and thought-provoking and it deserves a wide readership."
— Avi Shlaim, author of The Iron Wall: Israel and the Arab World