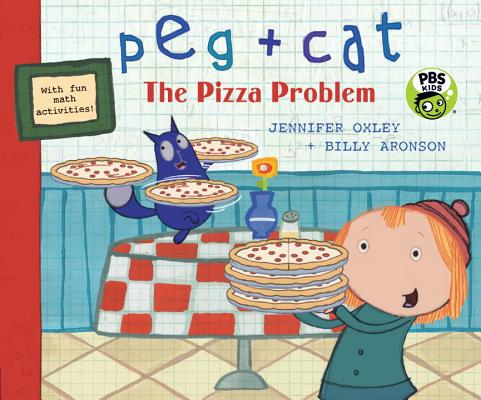 What do fractions have to do with pizza? The stars of the Emmy Award–winning animated series Peg + Cat serve up a delicious new episode.

It’s lunchtime at Peg’s Pizza Place! Peg and Cat are excited to take their first order — from the Teens! — only to learn that some of their customers want a whole pizza while one of them wants half a pie. How can Peg and Cat make half a pie when they don’t know what half is? Luckily, Ramone and Mac are there to help, with a slice up the middle of the pizza. As more customers come in, things get entertaining, with Peg singing a jazzy song and Cat doing a dance. But soon there’s another problem: four orders, but only two and a half pizzas left. Peg is totally freaking out — until Cat reminds her that when it comes to halves and wholes, it’s all in how you slice it.

Peg + Cat is the Emmy Award–winning animated TV series created by Jennifer Oxley and Billy Aronson and produced by the Fred Rogers Company. It was named best new series at the 2015 Kidscreen Awards.

Peg and Cat return in a new picture book and take math into the kitchen to help solve a crisis...Illustrations of the math problems support visual learning and highlight the cast of delightful characters, from “the Teens” to Ludwig van Beethoven and Zebra Guy. A fun way to teach math from definition to application.
—School Library Journal

What better way to learn fractions than by thinking about pizza?...This book would be good for supplemental math activities, as well as a fun story for reading aloud or enjoying individually.
—School Library Connection