My Day with the Panye (Hardcover) 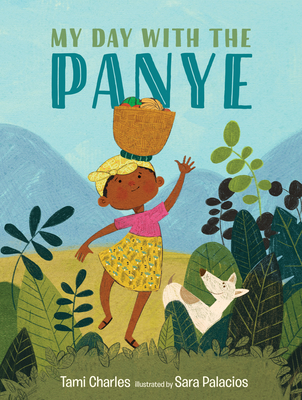 A young girl in Haiti is eager to learn how to carry a basket to market in an exuberant picture book with universal appeal.

“To carry the panye, we move gracefully, even under the weight of the sun and the moon.”

In the hills above Port-au-Prince, a young girl named Fallon wants more than anything to carry a large woven basket to the market, just like her Manman. As she watches her mother wrap her hair in a mouchwa, Fallon tries to twist her own braids into a scarf and balance the empty panye atop her head, but realizes it’s much harder than she thought. BOOM! Is she ready after all? Lyrical and inspiring, with vibrant illustrations highlighting the beauty of Haiti, My Day with the Panye is a story of family legacy, cultural tradition, and hope for the future. Readers who are curious about the art of carrying a panye will find more about this ancient and global practice in an author’s note at the end.

Tami Charles is the author of the critically acclaimed Freedom Soup, illustrated by Jacqueline Alcántara, as well as numerous other picture books and novels for children and young adults, including All Because You Matter, illustrated by Bryan Collier. She lives in New Jersey with her husband and son.

Sara Palacios has illustrated numerous picture books, including Between Us and Abuela: A Family Story from the Border by Mitali Perkins, and many others. She divides her time between San Francisco and Mexico City.

Charles sprinkles Haitian words into the text that give texture to this loving book, which is part interpersonal story and a part travelogue of sights and sounds. . .The poetic writing and Fallon’s assessment of her ability will touch children deeply. . . A few facts, a generous worldview, and a bonding of mother and daughter makes this book ideal for story hours and lap-sharing.
—School Library Journal (starred review)

“In the hills of Port-au-Prince,” little Fallon has a lot on her mind as she accompanies her mother into the bustling market, but more than anything, she wants to carry a panye on her head. . .Fallon is as easy to root for as Haiti is lovely to gaze upon in this graceful book.
—Kirkus Reviews

Fallon couldn’t be more excited about accompanying Manman to the market. She not only gets to wrap her hair in a mouchwa in imitation of her mother but also gets to carry the panye. . .While the text honors the work of women and girls who keep communities strong and traditions meaningful, Palacios’ cheerful illustrations are as vibrant and lush as the island itself, a perfect complement to Charles’ tribute to the women of Haiti.
—Booklist

The text has a rhythmic vibrancy, rich with imagery. . .The vivid narrative is matched by the effervescent digital art, packed to the brim with texture and bold colors and perfectly capturing the milieu of the Haitian city, from the “tap-tap bus” that chugs by, to the graffiti that celebrates Haitian culture, to the joyful chaos of the market. . .plenty of kids will relate to Fallon’s yearning to prove her mettle by carrying the basket and they’ll appreciate Manman’s patience and encouragement. Readers who enjoyed the neighborhood jaunt in Quintero’s My Papi Has a Motorcycle (BCCB 5/19) will want to amble along with Fallon and Manman.
—The Bulletin of the Center for Children's Books

Sketching Haiti after the 2010 earthquake, Charles (All Because You Matter) centers Fallon, a brown-skinned Haitian girl who envies her mother’s ability to carry the family’s panye on her head as she walks to and from market. . . . In bright, complex colors and patterns rendered in gouache and assembled digitally, Palacios (A Way with Wild Things) paints houses; shops with French-language signage; “walls, still standing” post-earthquake; and a warm, sociable Port-au-Prince community. The tale celebrates how, in Haitian society, strong women support their families. . . Spotlighting a preservation of matrilineal skills and a compassionate parent-child relationship, this rich portrait of a tight-knit, resilient community simultaneously serves as warm encouragement to persevere when learning a new skill.
—Publishers Weekly

Author Tami Charles and illustrator Sara Palacios have filled this picture book with vivid colors and descriptive language. Set in Haiti, the story centers on a young girl, Fallon, going to the market with her mother, Manman, who wears the panye on her head to carry food home. . . . The overall tone of the text is light-hearted yet it will nevertheless lend itself to questions and discussions about cultural diversity.
—School Library Connection

Charles weaves some words of Haitian Creole and some longer phrases, followed by the translation, into her beautifully musical text. . . . Palacios’ exuberant, colorful illustrations bring to life the busy marketplace in Port-au-Prince.
—The Buffalo News