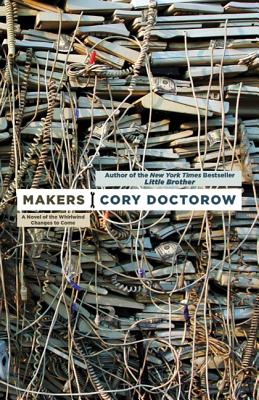 “Based on Cory Doctorow's predictive abilities, Makers seems like an all-too-true forecast of the near future. The result is both frightening and exhilarating and filled with characters you wish you knew. (Who knows, maybe you do!)”
— Randy Smith, Destinations Booksellers, New Albany, IN

Perry and Lester invent things: seashell robots that make toast, Boogie Woogie Elmo dolls that drive cars. They also invent entirely new economic systems. When Kodak and Duracell are broken up for parts by sharp venture capitalists, Perry and Lester help to invent the "New Work," a New Deal for the technological era. Barefoot bankers cross the nation, microinvesting in high-tech communal mini-startups. Together, they transform the nation and blogger Andrea Fleeks is there to document it.

Then it slides into collapse. The New Work bust puts the dot-bomb to shame. Perry and Lester build a network of interactive rides in abandoned Walmarts across the land. As their rides gain in popularity, a rogue Disney executive engineers a savage attack on the rides by convincing the police that their 3D printers are being used to make AK-47s.

Lawsuits multiply as venture capitalists take on a new investment strategy: backing litigation against companies like Disney. Lester and Perry's friendship falls to pieces when Lester gets the fatkins treatment, which turns him into a sybaritic gigolo.

Then things get really interesting.

“Appealing characters and extremely interesting ideas that will appeal to his fans and SF aficionados as well as readers interested in cogitating on the social consequences of cybertechnology's nearexponential growth. Enthusiastically recommended.” —Library Journal, starred review

“This is just one king-hell of a science fiction novel. Nobody in the world but [Doctorow] could have fabricated this amazing thing. It reads like it was written in 800-word van Vogt bursts in between yoga sessions, but man, this is the stuff. It makes twentieth century science fiction read like an antique collection.” —Bruce Sterling