The Rapture of the Nerds: A tale of the singularity, posthumanity, and awkward social situations (Paperback) 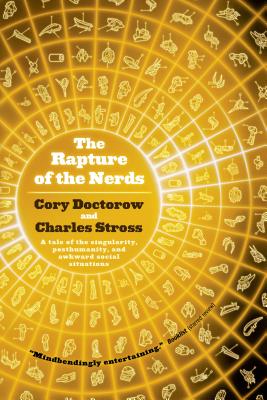 By Cory Doctorow, Charles Stross
$17.99
Email or call for price.

Welcome to the fractured future, at the dusk of the twenty-first century.

Earth has a population of roughly a billion hominids. For the most part, they are happy with their lot. Those who are unhappy have emigrated, joining the swarming densethinker clades that fog the inner solar system with a dust of molecular machinery so thick that it obscures the sun.

The splintery metaconsciousness of the solar system has largely sworn off its pre-post-human cousins dirtside, but its minds sometimes wander…and when that happens, it casually spams Earth's networks with plans for cataclysmically disruptive technologies that emulsify whole industries, cultures, and spiritual systems. A sane species would ignore these get-evolved-quick schemes, but there's always someone who'll take a bite from the forbidden apple.

So until the overminds bore of stirring Earth's anthill, there's Tech Jury Service: random humans, selected arbitrarily, charged with assessing dozens of new inventions and ruling on whether to let them loose. Young Huw, a technophobic, misanthropic Welshman, has been selected for the latest jury, a task he does his best to perform despite an itchy technovirus, the apathy of the proletariat, and a couple of truly awful moments on bathroom floors.
Rapture of the Nerds is a brilliant collaboration by Cory Doctorow and Charles Stross, two of the defining personalities of post-cyberpunk science fiction.

Charles Stross is the author of the bestselling Merchant Princes series, the Laundry series, and several stand-alone novels including Glasshouse, Accelerando, and Saturn's Children. Born in Leeds, England, in 1964, Stross studied in London and Bradford, earning degrees in pharmacy and computer science. Over the next decade and a half he worked as a pharmacist, a technical writer, a software engineer, and eventually as a prolific journalist covering the IT industry. His short fiction began attracting wide attention in the late 1990s; his first novel, Singularity Sky, appeared in 2003. He has subsequently won the Hugo Award twice. He lives with his wife in Edinburgh, Scotland, in a flat that is slightly older than the state of Texas.

“There's a superhuman energy and intelligence to Makers that I haven't see since mid-period Bruce Sterling.” —Lev Grossman, New York Times bestselling author of The Magicians

“If imagination is the key to success for a writer, Charles Stross has it in spades.” —The Times (London)