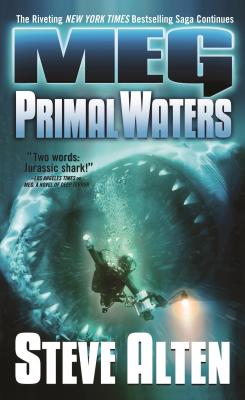 This is book number 3 in the MEG series.

It was the apex predator of all time, the most fearsome creature that ever lived -- a 70-foot, 70,000 pound Great White shark. Hundreds of 7-inch serrated teeth filled jaws that could swallow an elephant whole. It could sense its prey miles away, inhaling its scent as it registered the beat of its fluttering heart, and if you ever came close enough to see the monster...it was already too late.

Eighteen years have passed since Jonas Taylor last crossed paths with carcharodon Megalodon. Now a middle-aged father of two, he is overwhelmed by mountains of bills and the daily strife of raising a family. But life is about to change. A Hollywood television producer wants Jonas to join his new survival series: Daredevils. For the next six weeks, two teams of crazy daredevils on a South Pacific Ocean voyage will try to outperform one another in front of the cameras. Jonas needs the money, and the job of doing the color commentary seems easy enough. But behind the scenes, someone else is pulling the strings. And before it's over, Jonas will again come face to face with the most dangerous creatures ever to stalk the Earth.

Steve Alten is the best-selling author of the MEG series - which was the basis for the feature film The Meg, starring Jason Statham - The Domain Trilogy, and standalone supernatural thrillers such as The Omega Project and Goliath. A native of Philadelphia, he earned a Bachelor’s degree from Penn State, a Masters from the University of Delaware, and a Doctorate from Temple University. He is the founder and director of Adopt-An-Author, a free nationwide teen reading program used in thousands of secondary school classrooms across the country to excite reluctant readers.

“An exuberant, potboiling action thriller. The shark attack scenes . . . are numerous and exciting. Fans should devour it.” —Publishers Weekly on MEG: Primal Waters

“An adrenaline-pumping thriller!” —New York Post on Meg: A Novel of Deep Terror

“A heart-stopping thriller.” —Ingram on The Trench

“An entertaining tale of gripping nonstop horror.” —Midwest Book Review on The Trench

“A fast-paced thriller with many plot twists.” —Booklist on The Trench

“Alten can write a mean prehistoric shark scene.” —Publishers Weekly on The Trench