Off Armageddon Reef: A Novel in the Safehold Series (#1) (Mass Market) 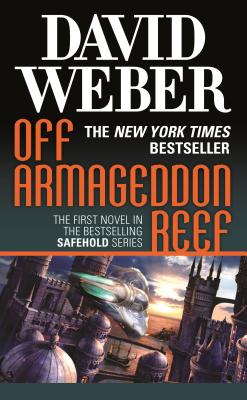 This is book number 1 in the Safehold series.

Humanity pushed its way to the stars - and encountered the Gbaba, a ruthless alien race that nearly wiped us out.

Earth and her colonies are now smoldering ruins, and the few survivors have fled to distant, Earth-like Safehold, to try to rebuild. But the Gbaba can detect the emissions of an industrial civilization, so the human rulers of Safehold have taken extraordinary measures: with mind control and hidden high technology, they've built a religion in which every Safeholdian believes, a religion designed to keep Safehold society medieval forever.

800 years pass. In a hidden chamber on Safehold, an android from the far human past awakens. This "rebirth" was set in motion centuries before, by a faction that opposed shackling humanity with a concocted religion. Via automated recordings, "Nimue" - or, rather, the android with the memories of Lieutenant Commander Nimue Alban - is told her fate: she will emerge into Safeholdian society, suitably disguised, and begin the process of provoking the technological progress which the Church of God Awaiting has worked for centuries to prevent.

Nothing about this will be easy. To better deal with a medieval society, "Nimue" takes a new gender and a new name, "Merlin." His formidable powers and access to caches of hidden high technology will need to be carefully concealed. And he'll need to find a base of operations, a Safeholdian country that's just a little more freewheeling, a little less orthodox, a little more open to the new.

And thus Merlin comes to Charis, a mid-sized kingdom with a talent for naval warfare. He plans to make the acquaintance of King Haarahld and Crown Prince Cayleb, and maybe, just maybe, kick off a new era of invention. Which is bound to draw the attention of the Church...and, inevitably, lead to war.

It's going to be a long, long process. And David Weber's epic Off Armageddon Reef is can't-miss sci-fi.

Safehold Series
1. Off Armageddon Reef
2. By Schism Rent Asunder
3. By Heresies Distressed
4. A Mighty Fortress
5. How Firm A Foundation
6. Midst Toil and Tribulation
7. Like A Mighty Army
8. Hell's Foundations Quiver
9. At the Sign of Triumph

David Weber is a science fiction phenomenon. His popular Honor Harrington and Honorverse novels—including Mission of Honor, At All Costs, and Torch of Freedom—are New York Times bestsellers and can't come out fast enough for his devoted readers. He is also the author of the Safehold series, including Off Armageddon Reef, By Schism Rent Asunder, By Heresies Distressed and A Mighty Fortress. His other top-selling science fiction novels include Out of the Dark, the Dahak books and the Multiverse books, written with Linda Evans. He has also created an epic SF adventure series in collaboration with John Ringo, including We Few. His novels have regularly been Main Selections of the Science Fiction Book Club. Weber has a bachelor’s degree from Warren Wilson College, and attended graduate school in history at Appalachian State University. He lives in South Carolina.

“Off Armageddon Reef shows David Weber at the top of his game.” —David Drake

“Vast, complex, intricate, subtle, and unlaydownable. This looks like the start of the biggest thing in science fiction since Isaac Asimov's Foundation series.” —Dave Duncan

“Weber has done it once again.” —Starlog

“Weber launches an epic series with this gripping far-future saga, which springboards off the near-destruction of humanity in a massive war with the Gbaba. The survivors of the human race retreat to the planet Safehold, where they sacrifice basic human rights--and an accurate memory of the Gbaba--for the preservation of the species. The colony's founders psychologically program the colonists to prevent the re-emergence of scientific inquiry, higher mathematics or advanced technology, which the Gbaba would detect and destroy.” —Publishers Weekly, starred review

“In his first book for Tor, the author of the popular Honor Harrington novels embarks on a new SF epic of cultural evolution and humanity's need to conquer the unknown. Rich backgrounds and vivid characters combine to make this series opener a priority purchase for SF collections.” —Library Journal , starred review

“Earth has been destroyed by an alien invasion, and survivors are clinging to a precarious and primitive existence on a planet they have named Safehold. But they are divided into two major factions: a theocratic church opposed to all technological progress, and a secular class of aristocrats and merchants who support not only technology but expanding the habitable area of Safehold. There are factions and internal conflicts on both sides, and each has infiltrated the other.” —Booklist, starred review

“Fantastic in every sense of the word--the kind of book that makes you sit back and think about this reality that we call life. Who can ask for more than that? While devouring this book, I kept finding myself drawn back to Walter Miller's amazing A Canticle for Leibowitz. Off Armageddon Reef has that same kind of introspective power, wrapped in a compelling story and with characters I grew to love.” —R. A. Salvatore

“David Weber is the master of scope, and Off Armageddon Reef is breathtaking in scope of characters, scope of its universe, and scope of time.… Weber masterfully weaves a ferocious amount of vision into a story that is surprisingly easy to read and (not surprisingly) hard to put down.” —Elizabeth Haydon