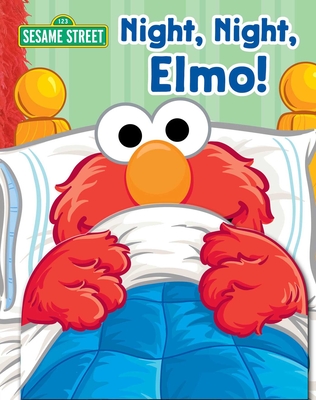 Perfect for bedtime, this adorable new casebound board book in the Guess Who series features five different peek-a-boo flaps and a surprise pop-up at the end!

It’s time for Elmo to go to bed, but first he has to put on his pajamas, brush his teeth, listen to a story, and more. Kids open the flaps throughout to see how Elmo gets ready for bed. An adorable story with one of your favorite Sesame Street characters will make this an interactive bedtime favorite.

Gina Gold has written and developed projects for Sesame Street, Scholastic, Warner Brothers, Reader’s Digest, and SeaWorld among other publishers and media outlets.  She is known for bringing fresh ideas and creativity to stories featuring some of the world’s most recognizable characters. Gina is also a television writer and an award-winning journalist. She lives in Los Angeles, CA.


Ernie Kwiat (rhymes with "what") was born in Houston, Texas, and raised near New Castle, in western Pennsylvania. He studied illustration at the School of Visual Arts in New York City before serving in the U.S. Navy. Ernie then earned his MFA, specializing in printmaking, from Mills College in Oakland, California. As art director and designer for a commercial screen-printing company in California, he designed and created graphics for clients including Lucas Films, Hanna-Barbera, Disney, and Sesame Workshop. This led to his next role as art department head of Sesame Street General Stores where he performed as an illustrator and product designer. Ernie currently enjoys working as a freelance illustrator, and in 2019 one of his picture books became a New York Times bestseller.