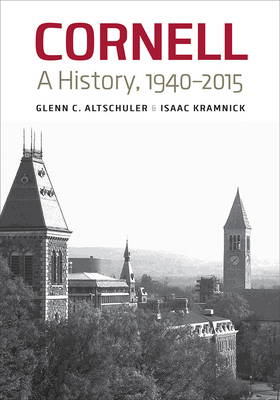 In their history of Cornell since 1940, Glenn C. Altschuler and Isaac Kramnick examine the institution in the context of the emergence of the modern research university. The book examines Cornell during the Cold War, the civil rights movement, Vietnam, antiapartheid protests, the ups and downs of varsity athletics, the women's movement, the opening of relations with China, and the creation of Cornell NYC Tech. It relates profound, fascinating, and little-known incidents involving the faculty, administration, and student life, connecting them to the "Cornell idea" of freedom and responsibility. The authors had access to all existing papers of the presidents of Cornell, which deeply informs their respectful but unvarnished portrait of the university. Institutions, like individuals, develop narratives about themselves. Cornell constructed its sense of self, of how it was special and different, on the eve of World War II, when America defended democracy from fascist dictatorship. Cornell's fifth president, Edmund Ezra Day, and Carl Becker, its preeminent historian, discerned what they called a Cornell "soul," a Cornell "character," a Cornell "personality," a Cornell "tradition"--and they called it "freedom." "The Cornell idea" was tested and contested in Cornell's second seventy-five years. Cornellians used the ideals of freedom and responsibility as weapons for change--and justifications for retaining the status quo; to protect academic freedom--and to rein in radical professors; to end in loco parentis and parietal rules, to preempt panty raids, pornography, and pot parties, and to reintroduce regulations to protect and promote the physical and emotional well-being of students; to add nanofabrication, entrepreneurship, and genomics to the curriculum--and to require language courses, freshmen writing, and physical education. In the name of freedom (and responsibility), black students occupied Willard Straight Hall, the anti-Vietnam War SDS took over the Engineering Library, proponents of divestment from South Africa built campus shantytowns, and Latinos seized Day Hall. In the name of responsibility (and freedom), the university reclaimed them. The history of Cornell since World War II, Altschuler and Kramnick believe, is in large part a set of variations on the narrative of freedom and its partner, responsibility, the obligation to others and to one's self to do what is right and useful, with a principled commitment to the Cornell community--and to the world outside the Eddy Street gate.

Glenn C. Altschuler is Dean of the School of Continuing Education and Summer Sessions and Thomas and Dorothy Litwin Professor of American Studies at Cornell University. He is a former columnist for the New York Times and the author or coauthor of several books, including Rude Republic: Americans and Their Politics in the Nineteenth Century and All Shook Up: How Rock 'n' Roll Changed America. Isaac Kramnick is Richard J. Schwartz Professor of Government at Cornell University, where he also served as Vice Provost for Undergraduate Education and faculty-elected member of the Board of Trustees. He is the author or editor of many books, including studies of the American founding fathers, Thomas Paine, Edmund Burke, and the twentieth-century Englishman Harold Laski.