Heading Out: A History of American Camping (Hardcover) 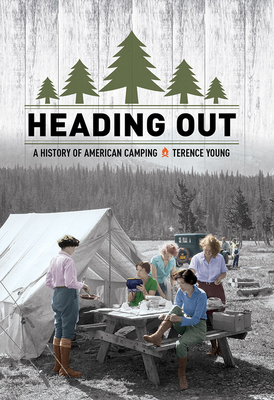 Who are the real campers? Through-hiking backpackers traversing the Appalachian Trail? The family in an SUV making a tour of national parks and sleeping in tents at campgrounds? People committed to the RV lifestyle who move their homes from state to state as season and whim dictate? Terence Young would say: all of the above. Camping is one of the country's most popular pastimes--tens of millions of Americans go camping every year. Whether on foot, on horseback, or in RVs, campers have been enjoying themselves for well more than a century, during which time camping's appeal has shifted and evolved. In Heading Out, Young takes readers into nature and explores with them the history of camping in the United States.Young shows how camping progressed from an impulse among city-dwellers to seek temporary retreat from their exhausting everyday surroundings to a form of recreation so popular that an industry grew up around it to provide an endless supply of ever-lighter and more convenient gear. Young humanizes camping's history by spotlighting key figures in its development and a sampling of the campers and the variety of their excursions. Readers will meet William H. H. Murray, who launched a craze for camping in 1869; Mary Bedell, who car camped around America for 12,000 miles in 1922; William Trent Jr., who struggled to end racial segregation in national park campgrounds before World War II; and Carolyn Patterson, who worked with the U.S. Department of State in the 1960s and 1970s to introduce foreign service personnel to the "real" America through trailer camping. These and many additional characters give readers a reason to don a headlamp, pull up a chair beside the campfire, and discover the invigorating and refreshing history of sleeping under the stars.

Terence Young is Professor of Geography at California State Polytechnic University. He is the author of Building San Francisco's Parks, 1850-1930 and coeditor of The Theme Park Landscapes: Antecedents and Variations.