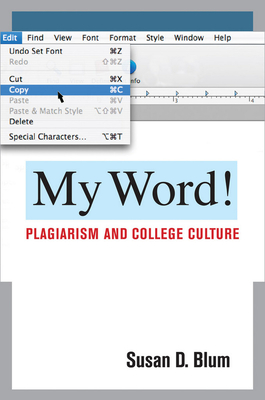 Classroom Cheats Turn to Computers. Student Essays on Internet Offer Challenge to Teachers. Faking the Grade. Headlines such as these have been blaring the alarming news of an epidemic of plagiarism and cheating in American colleges: more than 75 percent of students admit to having cheated; 68 percent admit to cutting and pasting material from the Internet without citation. Professors are reminded almost daily that many of today's college students operate under an entirely new set of assumptions about originality and ethics. Practices that even a decade ago would have been regarded almost universally as academically dishonest are now commonplace.

Is this development an indication of dramatic shifts in education and the larger culture? In a book that dismisses hand-wringing in favor of a rich account of how students actually think and act, Susan D. Blum discovers two cultures that exist, often uneasily, side by side in the classroom. Relying extensively on interviews conducted by students with students, My Word presents the voices of today's young adults as they muse about their daily activities, their challenges, and the meanings of their college lives. Outcomes-based secondary education, the steeply rising cost of college tuition, and an economic climate in which higher education is valued for its effect on future earnings above all else.

These factors each have a role to play in explaining why students might pursue good grades by any means necessary. These incentives have arisen in the same era as easily accessible ways to cheat electronically and with almost intolerable pressures that result in many students being diagnosed as clinically depressed during their transition from childhood to adulthood. However, Blum suggests, the real problem of academic dishonesty arises primarily from a lack of communication between two distinct cultures within the university setting. On one hand, professors and administrators regard plagiarism as a serious academic crime, an ethical transgression, even a sin against an ethos of individualism and originality. Students, on the other hand, revel in sharing, in multiplicity, in accomplishment at any cost.

Although this book is unlikely to reassure readers who hope that increasing rates of plagiarism can be reversed with strongly worded warnings on the first day of class, My Word opens a dialogue between professors and their students that may lead to true mutual comprehension and serve as the basis for an alignment between student practices and their professors' expectations.

Susan D. Blum is Professor of Anthropology at the University of Notre Dame. She is the author, most recently, of Lies That Bind: Chinese Truth, Other Truths and editor of Making Sense of Language: Readings in Culture and Communication.