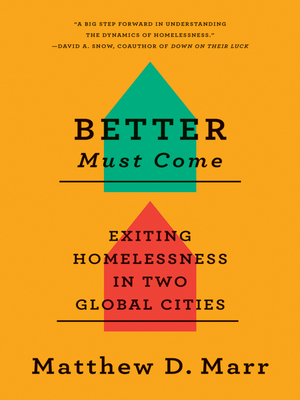 By Matthew D. Marr
Email or call for price

In Better Must Come, Matthew D. Marr reveals how social contexts at various levels combine and interact to shape the experiences of transitional housing program users in two of the most prosperous cities of the global economy, Los Angeles and Tokyo. Marr, who has conducted fieldwork in U.S. and Japanese cities for over two decades, followed the experiences of thirty-four people as they made use of transitional housing services and after they left such programs. This comparative ethnography is groundbreaking in two ways--it is the first book to directly focus on exits from homelessness in American or Japanese cities, and it is the first targeted comparison of homelessness in two global cities.Marr argues that homelessness should be understood primarily as a socially generated, traumatic, and stigmatizing predicament, rather than as a stable condition, identity, or culture. He pushes for movement away from the study of homeless people and homeless culture toward an understanding of homelessness as a condition that can be transcended at individual and societal levels. Better Must Come prescribes policy changes to end homelessness that include expanding subsidized housing to persons without disabilities and experiencing homelessness chronically, as well as taking broader measures to address vulnerabilities produced by labor markets, housing markets, and the rapid deterioration of social safety nets that often results from neoliberal globalization.