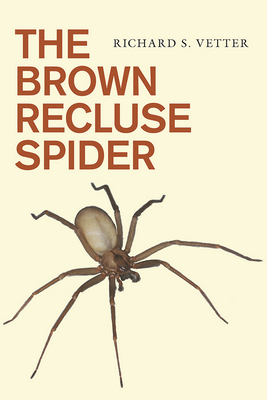 By Richard S. Vetter
Email or call for price

The brown recluse is a fascinating spider very well adapted to dwelling in houses and other buildings. Because of this very quality and the ghastly reputation associated with the medical consequences of its bite, it has become infamous throughout North America. Although recluse spiders can cause serious skin injuries and, in very rare cases, death, the danger posed by this spider is often exaggerated as a result of arachnophobia and the misdiagnosis of non-spider-related conditions as brown recluse bites. These misdiagnoses often occur in areas of North America where the spider does not exist, making legitimate bites improbable. One of the greatest factors that keeps the myths alive is misidentification of common (and harmless) spiders as brown recluses. With this book, Richard S. Vetter hopes to educate readers regarding the biology of the spider and medical aspects of its bites, to reduce the incidence of misdiagnoses, and to quell misplaced anxiety.

In The Brown Recluse Spider, Vetter covers topics such as taxonomy, identification, misidentification, life history characteristics and biology, medical aspects of envenomations, medical conditions misdiagnosed as brown recluse bites, other spider species of medical consideration (several of which have been wrongly implicated as threats to human health), and the psychology behind the entrenched reasons why people believe so deeply in the presence of the spider in the face of strong, contradictory information. Vetter also makes recommendations for control of the spider for households in areas where the spiders are found and describes other species of recluse spiders in North America. Although The Brown Recluse Spider was written for a general audience, it is also a valuable source of information for arachnologists and medical personnel.

Richard S. Vetter has retired as a research associate in the Department of Entomology at the University of California, Riverside. He is coauthor of PCT Field Guide for the Management of Urban Spiders.