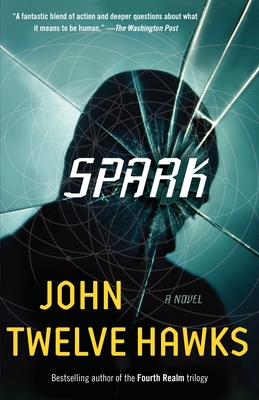 After a catastrophic motorcycle accident, Jacob Underwood woke up believing he was already dead. This unusual condition has a name—Cotard’s syndrome—and a surprising benefit: Feeling dead makes Jacob frighteningly good at his job. A contract employee of the multinational corporation DBG, he can now carry out his assignments with ruthless precision, untroubled by guilt, fear, dishonor or any moral conflict—the perfect skills for a hired assassin. When a bright young DBG associate vanishes without a trace, likely taking vast sums of money and valuable company information with her, Jacob will pursue her into a labyrinthine network of dark dealings which extend around the globe, and far beyond his understanding.

In Spark, master storyteller John Twelve Hawks spins a riveting tale and delves into what it means to be human inside the modern surveillance state.

John Twelve Hawks is the author of the New York Times bestsellers The Traveler, The Dark River, and The Golden City.

“A fantastic blend of action and deeper questions about what it means to be human.”
—The Washington Post

“Like Philip K Dick’s best novels, [Spark] is insidious and troubling, its most profound points made with disarming casualness.”
—The Guardian (London)

“Darkly futuristic . . . with a protagonist unlike any other.”
—Austin Chronicle

“Twelve Hawks, like a character in his story, is untethered by technology and unreachable by the tentacles of the Vast Machine. He is a free spirit, a lone voice of reason in a data-fogged world.”
—San Francisco Chronicle

“Spark is a marvel. An utterly gripping, unbelievably imaginative tale with all the heart, drive, and humanity that its hero, Jacob Underwood, a contract assassin, lacks. . . . At once a heart pounding thriller, a bitter indictment of our growing surveillance state, and a life affirming story of the indomitability of the human heart.”
—Christopher Reich, New York Times bestselling author of Rules of Deception

“Breathless action. . . . Twelve Hawks sets up the battles in Spark as more than simple combat. His appeal lies in his pairing of one system of belief against another and letting them duke it out.”
—The New York Times

“From start to finish Spark defies expectation, joining a ‘dead’ man’s cold regard with suspense at fever pitch.”
—Locus

“As good as the Fourth Realm books were, this one may be even more appealing: less fantastic, more grounded in a contemporary real world, with a narrator who is deeply scarred and endlessly fascinating.” —Booklist (starred review)