Monolingualism of the Other Or, the Prosthesis of Origin (Cultural Memory in the Present) (Paperback) 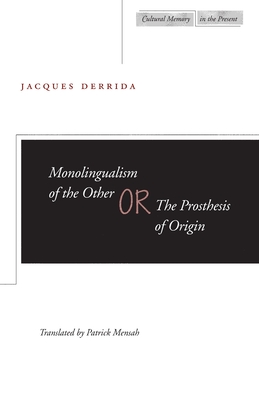 "I have but one language--yet that language is not mine." This book intertwines theoretical reflection with historical and cultural particularity to enunciate, then analyze this conundrum in terms of the author's own relationship to the French language.

The book operates on three levels. At the first level, a theoretical inquiry investigates the relation between individuals and their "own" language. It also explores the structural limits, desires, and interdictions inherent in such "possession," as well as the corporeal aspect of language (its accents, tones, and rhythms) and the question of the "countability" of languages (that is, their discreteness or factual givenness).

At the second level, the author testifies to aspects of his acculturation as an Algerian Jew with respect to language acquisition, schooling, citizenship, and the dynamics of cultural-political exclusion and inclusion. At the third level, the book is comparative, drawing on statements from a wide range of figures, from the Moroccan Abdelkebir Khatibi to Franz Rosenzweig, Gershom Scholem, Hannah Arendt, and Emmanuel Levinas.

Since one of the book's central themes is the question of linguistic and cultural identity, its argument touches on several issues relevant to the current debates on multiculturalism. These issues include the implementation of colonialism in the schools, the tacit or explicit censorship that excludes other (indigenous) languages from serious critical consideration, the investment in an ideal of linguistic purity, and the problematics of translation. The author also reveals the complex interplay of psychological factors that invests the subject of identity with the desire to recover a "lost" language of origin and with the ambition to master the language of the colonizer.

Jacques Derrida was Director of Studies at the Ecole des Hautes Etudes en Sciences Sociales, Paris, and Professor of Humanities at the University of California, Irvine. Among his books translated into English is Resistances of Psychoanalysis (Stanford, 1998).

"In this elegant and engaging essay, Derrida turns to the subject of Derrida as Algerian Jew and as a dissociated Francophone."—The Front Table

"Clearly, Derrida is bravely turning away from decades of structuralist thinking that made even the slightest hint of transcendence into an intellectual taboo."—Substance

"Derrida has produced a text which takes philosophy and autobiography into the closest possible proximity; yet the result is something far more significant than the personal reminiscences of a philosopher."—Times Literary Supplement