Voyage of the Turtle: In Pursuit of the Earth's Last Dinosaur (Paperback) 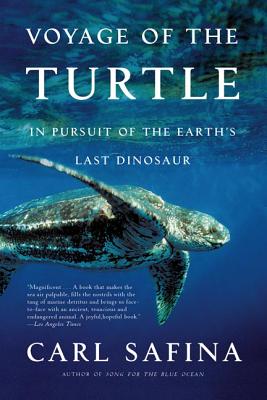 The story of an ancient sea turtle and what its survival says about our future, from the award-winning writer and naturalist

Though nature is indifferent to the struggles of her creatures, the human effect on them is often premeditated. The distressing decline of sea turtles in Pacific waters and their surprising recovery in the Atlantic illuminate what can go both wrong and right from our interventions, and teach us the lessons that can be applied to restore health to the world's oceans and its creatures. As Voyage of the Turtle, Carl Safina's compelling natural history adventure makes clear, the fate of the astonishing leatherback turtle, whose ancestry can be traced back 125 million years, is in our hands.

Writing with verve and color, Safina describes how he and his colleagues track giant pelagic turtles across the world's oceans and onto remote beaches of every continent. As scientists apply lessons learned in the Atlantic and Caribbean to other endangered seas, Safina follows leatherback migrations, including a thrilling journey from Monterey, California, to nesting grounds on the most remote beaches of Papua, New Guinea. The only surviving species of its genus, family, and suborder, the leatherback is an evolutionary marvel: a "reptile" that behaves like a warm-blooded dinosaur, an ocean animal able to withstand colder water than most fishes and dive deeper than any whale.

In his peerless prose, Safina captures the delicate interaction between these gentle giants and the humans who are finally playing a significant role in their survival.

Carl Safina's work has been recognized with MacArthur, Pew, and Guggenheim Fellowships, and his writing has won Orion, Lannan, and National Academies literary awards and the John Burroughs, James Beard, and George Rabb medals. He has a PhD in ecology from Rutgers University.

Safina is the inaugural holder of the endowed chair for nature and humanity at Stony Brook University, where he co-chairs the steering committee of the Alan Alda Center for Communicating Science and is founding president of the not-for-profit Safina Center. He hosted the 10-part PBS series Saving the Ocean with Carl Safina. His writing appears in The New York Times, National Geographic, Audubon, Orion, and other periodicals and on the Web at National Geographic News and Views, Huffington Post, and CNN.com.

Carl's books include Voyage of the Turtle, Becoming Wild, and The View from Lazy Point.

“Carl Safina is like some extraordinary astronaut who goes into space and comes back with fantastic tales of other planets and the creatures who inhabit them. Except that the marvelous planet is our own. This is a story of stoicism and wonder that will make the oceans seem that much richer to all who read it.” —Bill McKibben, author of Deep Economy

“That remarkable voice for the marine realm, Carl Safina, reveals the riveting tale of that most extraordinary creature, the Leatherback Turtle, overlain with the drama and hope of the battle for its conservation. No naturalist or planetary citizen can hope to be complete without Voyage of the Turtle. A fabulous book.” —Thomas E. Lovejoy, President, The Heinz Center for Science, Economics and the Environment