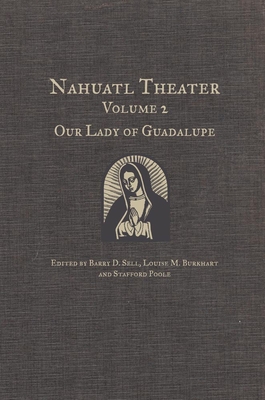 The foundation legend of the Mexican devotion to Our Lady of Guadalupe is one of the most appealing and beloved of all religious stories. In this volume, editors Barry D. Sell, Louise M. Burkhart, and Stafford Poole present the only known colonial Nahuatl-language dramas based on the Virgin of Guadalupe story: the Dialogue of the Apparition of the Virgin Saint Mary of Guadalupe, an anonymous work from the late seventeenth or early eighteenth century, and The Mexican Portent, authored by creole priest Joseph P rez de la Fuente in the early eighteenth century. The plays, never before published in English translation, are vital works in the history of the Guadalupe devotion, for they show how her story was presented to native people at a time when it was not universally known.

Faithful transcriptions and translations of the plays are accompanied here by introductory essays by Poole and Burkhart and by three additional previously unpublished Guadalupan texts in Nahuatl.

This volume is the second in a four-volume series titled Nahuatl Theater, edited by Sell and Burkhart.