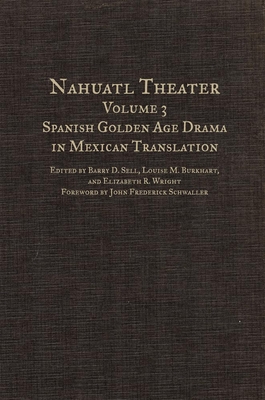 Don Bartolom de Alva was a mestizo who rose within New Spain's ecclesiastical hierarchy when people of indigenous heritage were routinely excluded from the priesthood. In 1640 and 1641 he translated several theatrical pieces from Spanish into Nahuatl, yet this prodigious accomplishment remained virtually unknown for centuries.

Nahuatl Theater, Volume 3 presents for the first time in English the complete dramatic works of Alva, the only known plays from Spain's Golden Age adapted into the lively world of Nahuatl-language theater. Alva's translations--"The Great Theater of the World," "The Animal Prophet and the Fortunate Patricide," "The Mother of the Best," and a farcical intermezzo--represent ambitious attempts to add complex, Baroque dramatic pieces by such literary giants as Lope de Vega and Pedro Calder n de la Barca to the repertory of Nahuatl theater, otherwise dominated by sober one-act religious plays grounded in medieval tradition. The Spanish sources and Alva's Nahuatl, set on facing pages with their English translations, show how Alva "Mexicanized" the plays by incorporating Nahuatl linguistic conventions and referencing local symbolism and social life. In their introductory essays, the editors offer contextual and interpretive information that provides an entr e into this rich material.

As the only known adaptations of these theatrical works into a Native American language, these plays stand as fine literature in their own right.