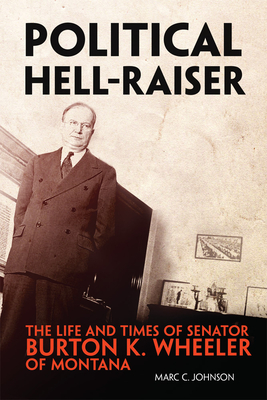 
Burton K. Wheeler (1882-1975) may have been the most powerful politician Montana ever produced, and he was one of the most influential--and controversial--members of the United States Senate during three of the most eventful decades in American history. A New Deal Democrat and lifelong opponent of concentrated power--whether economic, military, or executive--he consistently acted with a righteous personal and political independence that has all but disappeared from the public sphere. Political Hell-Raiser is the first book to tell the full story of Wheeler, a genuine maverick whose successes and failures were woven into the political fabric of twentieth-century America. Wheeler came of political age amid antiwar and labor unrest in Butte, Montana, during World War I. As a crusading United States attorney, he battled Montana's powerful economic interests, championed farmers and miners, and won election to the U.S. Senate in 1922. There he made his name as one of the "Montana scandalmongers," uncovering corruption in the Harding and Coolidge administrations. Drawing on extensive research and new archival sources, Marc C. Johnson follows Wheeler from his early backing of Franklin D. Roosevelt and ardent support of the New Deal to his forceful opposition to Roosevelt's plan to expand the Supreme Court and, in a move widely viewed as political suicide, his emergence as the most prominent spokesman against U.S. involvement in World War II right up to three days before Pearl Harbor. Johnson provides the most thorough telling of Wheeler's entire career, including all its accomplishments and contradictions, as well as the political storms that the senator both encouraged and endured. The book convincingly establishes the place and importance of this principled hell-raiser in American political history.