Three Plays: The Indolent Boys, Children of the Sun, and The Moon in Two Windows (Stories and Storytellers #4) (Paperback) 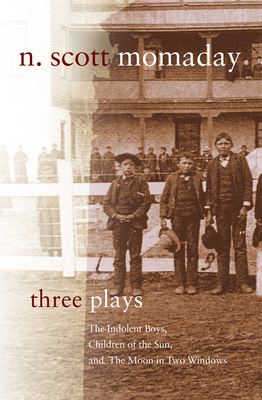 Long a leading figure in American literature, N. Scott Momaday is perhaps best known for his Pulitzer Prize-winning House Made of Dawn and his celebration of his Kiowa ancestry, The Way to Rainy Mountain. Momaday has also made his mark in theater through two plays and a screenplay. Published here for the first time, they display his signature talent for interweaving oral and literary traditions.

The Indolent Boys recounts the 1891 tragedy of runaways from the Kiowa Boarding School who froze to death while trying to return to their families. The play explores the consequences, for Indian students and their white teachers, of the federal program to "kill the Indian and save the Man." A joyous counterpoint to this tragedy, Children of the Sun is a short children's play that explains the people's relationship to the sun. The Moon in Two Windows, a screenplay set in the early 1900s, centers on the children of defeated Indian tribes, who are forced into assimilation at Carlisle, Pennsylvania, where the U.S. government established the first off-reservation boarding school.

Belonging with the best of Momaday's classic writing, these plays are works of a mature craftsman that preserve the mythic and cultural tradition of unique tribal communities in the face of an increasingly homogeneous society.