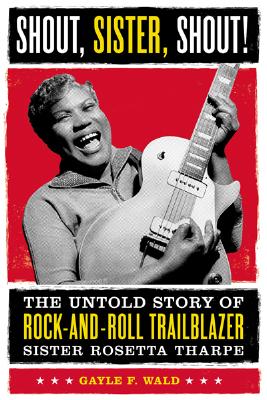 Long before "women in rock" became a media catchphrase, Rosetta Tharpe proved in spectacular fashion that women could rock. Born in Cotton Plant, Arkansas, in 1915, she was gospel's first superstar and the preeminent crossover figure of its "golden age" (1945-1965). Everyone who saw her perform said she could "make that guitar talk."

Shout, Sister, Shout! is the first biography of this trailblazing performer who influenced scores of popular musicians, from Elvis Presley and Little Richard to Eric Clapton and Bonnie Raitt. An African American guitar virtuoso, Tharpe defied categorization. Blues singer, gospel singer, folk artist, and rock-and-roller, she "went electric" in the late 1930s, amazing northern and southern, U.S. and international, and white and black audiences with her charisma and skill. Ambitious and relentlessly public, Tharpe even staged her own wedding as a gospel concert-in a stadium holding 20,000 people!

Wald's eye-opening biography, which draws on the memories of over 150 people who knew or worked with Tharpe, introduces us to this intriguing and forgotten musical heavyweight, forever altering our understanding of both women in rock and U.S. popular music.

Gayle F. Wald is a professor at George Washington University and the author of "Crossing the Line." She wrote the liner notes for a critically acclaimed 2003 Rosetta Tharpe tribute album. Wald lives in Washington, D.C.

Rosetta Tharpe was one of my first influences, one of the first people I heard sing. I'm glad Gayle Wald has done a book on her, because people need to know.--Isaac Hayes

"Shout, Sister, Shout is a revelation, an important document and fascinating story. Praise to Gayle Wald for digging deep into the roots of rock."--David Ritz, author, Divided Soul: The Life of Marvin Gaye

"Before Mahalia Jackson's name was known and before Edwin Hawkins was born, Sister Rosetta Tharpe was a gospel super star. Her unique style of singing, playing guitar and emoting was packaged by Little Richard and the Rolling Stones and led to Rock and Roll. Wald tells 'Sister's' story with understanding, passion and tremendous knowledge of the music and the people. Finally, 'Sister' can rest in peace!"--Horace Clarence Boyer, author of The Golden Age of Gospel