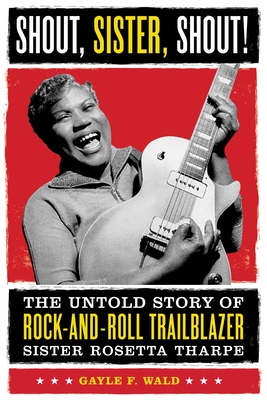 Long before "women in rock" became a media catchphrase, African American guitar virtuoso Rosetta Tharpe proved in spectacular fashion that women could rock. Born in Cotton Plant, Arkansas, in 1915, Tharpe was gospel's first superstar and the preeminent crossover figure of its golden age (1945–1965).

Shout, Sister, Shout! is the first biography of this trailblazing performer who influenced scores of popular musicians—from Elvis Presley and Little Richard to Eric Clapton and Etta James. Tharpe was raised in the Pentecostal Church, steeped in the gospel tradition, but she produced music that crossed boundaries, defied classification, and disregarded the social and cultural norms of the age. Blues singer, gospel singer, folk artist, and rock-and-roller, she "went electric" in the late 1930s, captivating both white and black audiences in the North and South, in the U.S. and internationally, with her charisma and skill. Ambitious and relentlessly public, Tharpe even staged her own wedding as a gospel concert in a stadium holding 20,000 people.

Wald's eye-opening biography, which draws on the memories of over 150 people who knew or worked with Tharpe, introduces us to this intriguing and forgotten musical heavyweight who forever altered our understanding of both women in rock and U.S. popular music.

Gayle F. Wald is a professor at George Washington University and the author of Crossing the Line. She wrote the liner notes for a critically acclaimed 2003 Rosetta Tharpe tribute album. Wald lives in Washington, D.C.

A book like this is long overdue. Rosetta Tharpe was a major star and a huge influence on the musicians of her day. Listen to her recordings and you can hear all the building blocks of rock and roll. —Joan Osborne, singer-songwriter

"Rosetta was one of the most beloved and influential artists ever in gospel music . . . and she blazed a trail for the rest of us women guitarists with her indomitable spirit and accomplished, engaging style. She has long been deserving of wider recognition and a place of honor in the field of music history." —Bonnie Raitt

"Rosetta Tharpe's life is a classic American tall tale, except that it happened, and, in these pages, you are there." —Greil Marcus, cultural critic

"Rosetta Tharpe was one of my first influences, one of the first people I heard sing. I'm glad Gayle Wald has done a book on her because people need to know." —Isaac Hayes

"Rosetta Tharpe's life is a classic American tall tale, except that it happened, and, in these pages, you are there."—Greil Marcus, cultural critic and author of Mystery Train: Images of America in Rock'n'Roll Music

"With the publication of this entertaining and enlightening biography, Tharpe-who reputedly played her electric guitar 'like a man,' withstood failed marriages, racial and sexual discrimination plus economic hardships-should receive the recognition she deserves."—Publishers Weekly

"Mixing tireless reporting with nuanced and cultural insights, Wald's Shout, Sister, Shout! is about as good as musical reparations get." —Tony Green, Vibe