Water Tossing Boulders: How a Family of Chinese Immigrants Led the First Fight to Desegregate Schools in the Jim Crow South (Hardcover) 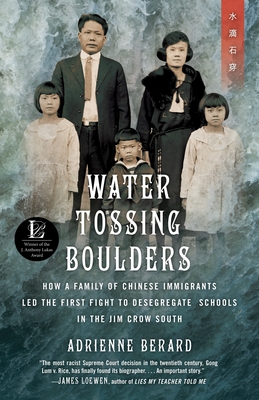 By Adrienne Berard
Email or call for price.
Special Order - Subject to Availability

A generation before Brown v. Board of Education struck down America’s “separate but equal” doctrine, one Chinese family and an eccentric Mississippi lawyer fought for desegregation in one of the greatest legal battles never told

On September 15, 1924, Martha Lum and her older sister Berda were barred from attending middle school in Rosedale, Mississippi. The girls were Chinese American and considered by the school to be “colored”; the school was for whites. This event would lead to the first US Supreme Court case to challenge the constitutionality of racial segregation in Southern public schools, an astonishing thirty years before the landmark Brown v. Board of Education decision.

Unearthing one of the greatest stories never told, journalist Adrienne Berard recounts how three unlikely heroes sought to shape a new South. A poor immigrant from southern China, Jeu Gong Lum came to America with the hope of a better future for his family. Unassuming yet boldly determined, his daughter Martha would inhabit that future and become the face of the fight to integrate schools. Earl Brewer, their lawyer and staunch ally, was once a millionaire and governor of Mississippi. When he took the family’s case, Brewer was both bankrupt and a political pariah—a man with nothing left to lose.

By confronting the “separate but equal” doctrine, the Lum family fought for the right to educate Chinese Americans in the white schools of the Jim Crow South. Using their groundbreaking lawsuit as a compass, Berard depicts the complicated condition of racial otherness in rural Southern society.

In a sweeping narrative that is both epic and intimate, Water Tossing Boulders evokes a time and place previously defined by black and white, a time and place that, until now, has never been viewed through the eyes of a forgotten third race. In vivid prose, the Mississippi Delta, an empire of cotton and a bastion of slavery, is reimagined to reveal the experiences of a lost immigrant community. Through extensive research in historical documents and family correspondence, Berard illuminates a vital, forgotten chapter of America’s past and uncovers the powerful journey of an oppressed people in their struggle for equality.

Adrienne Berard is an award-winning journalist and graduate of Columbia University’s Graduate School of Journalism. She has been the Writer-in-Residence at Delta State University in Mississippi and now resides in Williamsburg, Virginia.

“In an engaging bit of social history, Berard rescues a forgotten part of Southern history and brings it to light, offering readers a rare glimpse into Chinese immigrant life and the way segregation affected so many for decades. Flush with telling details and backed by meticulous research, a piece of near-forgotten Chinese-American history is retold.”
—Kirkus Reviews

“Surely the most racist Supreme Court decision in the twentieth century, Gong Lum v. Rice has finally found its biographer. Adrienne Berard, who lives about twenty miles from where it all happened, has unearthed fresh facts and brought them to life to tell an important story.”
—James Loewen, author of Lies My Teacher Told Me

“With luminous prose and intricate research, Adrienne Berard has preserved an undeservedly forgotten battle in the struggle for racial equality...In Berard’s skilled and supple hands, the past speaks eloquently to our American present.”
—Samuel G. Freedman, author of Breaking the Line: The Season in Black College Football That Transformed the Sport and Changed the Course of Civil Rights

“The human rights lessons offered up by the American South seem endless, and Adrienne Berard has found a story that further universalizes our national drama of rights pitted against power. The failed landmark desegregation battle of the Chinese-immigrant Lum family—to enable their daughter to attend a white-only school in the Mississippi Delta—might be called forgotten history if it hadn’t been virtually invisible in the first place. Which makes Berard’s exquisitely lush reconstruction of this liminal world remarkable as well as revelatory.”
—Diane McWhorter, Pulitzer–Prize winning author of Carry Me Home: Birmingham, Alabama, the Climactic Battle of the Civil Rights Revolution

“How could this chapter of history have remained buried for so long? Here is the shocking September day two Chinese American girls are sent home from school; and here, too, is a family’s resolute fight to send them back—a fight that is heartbreakingly bungled all the way to the Supreme Court. Gripping, evocative, and packed with irony upon irony, Water Tossing Boulders is a page-turner to boot. Bravo!”
—Gish Jen, author of The Girl at the Baggage Claim: A Tale of Two Selves

“This book about the Lum family’s historic challenge before the US Supreme Court is an eloquent—and needed—reminder that the prejudice that drives racism and the courage to resist it know no ethnic boundaries.”
—Paula J. Giddings, author of Ida, a Sword Among Lions: Ida B. Wells and the Campaign Against Lynching