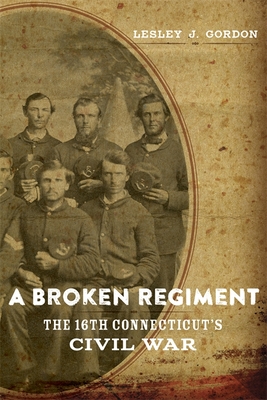 The product of over a decade of research, Lesley J. Gordon's A Broken Regiment recounts the tragic history of one of the Civil War's most ill-fated Union military units. Organized in the late summer of 1862, the 16th Connecticut Volunteer Infantry was unprepared for battle a month later, when it entered the fight at Antietam. The results were catastrophic: nearly a quarter of the men were killed or wounded, and Connecticut's 16th panicked and fled the field. After years of fighting, the regiment surrendered en masse in 1864. This unit's complex history amid the interplay of various, and often competing, perspectives results in a fascinating and heartrending story.

Lesley J. Gordon, the Charles G. Summersell Chair of Southern History at the University of Alabama, is the author of General George E. Pickett in Life and Legend, and coeditor of Inside the Confederate Nation: Essays in Honor of Emory M. Thomas.