The Faubourg Marigny of New Orleans: A History (Hardcover) 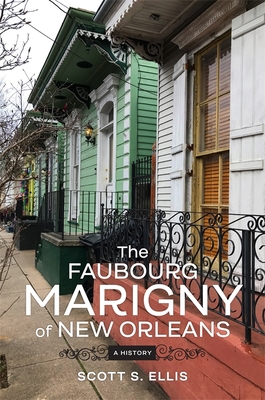 Leaving the crowded, tourist-driven French Quarter by crossing Esplanade Avenue, visitors and residents entering the Faubourg Marigny travel through rows of vibrantly colored Greek revival and Creole-style homes. For decades, this stunning architectural display marked an entry into a more authentic New Orleans. In the first complete history of this celebrated neighborhood, Scott S. Ellis chronicles the incomparable vitality of life in the Marigny, describes its architectural and social evolution across two centuries, and shows how many of New Orleans's most dramatic events unfolded in this eclectic suburb.

Founded in 1805, the Faubourg Marigny benefited from waves of refugees and immigrants settling on its borders. migr's from Saint-Domingue, Germany, Ireland, and Italy, in addition to a large community of the city's antebellum free people of color, would come to call Marigny home and contribute to its rich legacy. Shaped as well by epidemics and political upheaval, the young enclave hosted a post-Civil War influx of newly freed slaves seeking affordable housing and suffered grievous losses after deadly outbreaks of yellow fever. In the twentieth century, the district grew into a working-class neighborhood of creolized residents that eventually gave way to a burgeoning gay community, which, in turn, led to an era of "supergentrification" following Hurricane Katrina. Now, as with many historic communities in the heart of a growing metropolis, tensions between tradition and revitalization, informality and regulation, diversity and limited access contour the Marigny into an ever more kaleidoscopic picture of both past and present. Equally informative and entertaining, this nuanced history reinforces the cultural value of the Marigny and the importance of preserving this alluring neighborhood.