Masters of Empire: Great Lakes Indians and the Making of America (Hardcover) 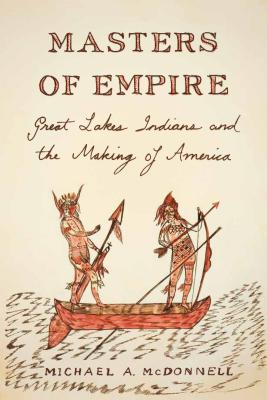 By Michael A. McDonnell
$35.00
Possibly out of print. Email or call to check availability and price.

In Masters of Empire, the historian Michael A. McDonnell reveals the pivotal role played by the native peoples of the Great Lakes in the history of North America. Though less well known than the Iroquois or Sioux, the Anishinaabeg, who lived across Lakes Michigan and Huron, were equally influential. Masters of Empire charts the story of one group, the Odawa, who settled at the straits between those two lakes, a hub for trade and diplomacy throughout the vast country west of Montreal known as the pays d’en haut.

Highlighting the long-standing rivalries and relationships among the great Indian nations of North America, McDonnell shows how Europeans often played only a minor role in this history, and reminds us that it was native peoples who possessed intricate and far-reaching networks of commerce and kinship, of which the French and British knew little. As empire encroached upon their domain, the Anishinaabeg were often the ones doing the exploiting. By dictating terms at trading posts and frontier forts, they played a crucial part in the making of early America.

Through vivid depictions—all from a native perspective—of early skirmishes, the French and Indian War, and the American Revolution, Masters of Empire overturns our assumptions about colonial America. By calling attention to the Great Lakes as a crucible of culture and conflict, McDonnell reimagines the landscape of American history.

Michael McDonnell is an associate professor of history at the University of Sydney. He is the author of The Politics of War: Race, Class, and Conflict in Revolutionary Virginia, winner of the 2008 New South Wales Premier's History Prize, and coeditor of Remembering the Revolution: Memory, History, and Nation-Making from Independence to the Civil War. His work was included in the Best American History Essays 2008 and he won the Lester Cappon Prize for the best article published in the William and Mary Quarterly in 2006. He has received numerous research scholarships and grants in the United States and Australia and has served as a distinguished lecturer for the Organization of American Historians. He lives in Sydney, Australia.

“Masters of Empire is a master class in how to do history right. If anyone is at all interested in knowing how to ‘help’ Indian people, they would do no better than following McDonnell's example: trying (and succeeding) in seeing our history and our actions as representative of smart, savvy, thinking actors in our own lives. This is an astounding book.” —David Treuer, The Los Angeles Times

“[Masters of Empire] makes a compelling case for the overwhelming power of the Anishinaabeg tribes of the Great Lakes region throughout the Colonial period.” —The New Yorker

“A fresh—and important—perspective on the history of colonial America . . . Like all fine works of history, Masters of Empire will force readers to think hard, this time about how much influence and power Indians had in colonial America — and about when and why they lost it.” —Glen Altschuler, Minneapolis Star-Tribune

“In Masters of Empire, historian Michael McDonnell describes a long-running history of contact, conflict, and collaboration among native peoples, English settlers, and French traders that took place in the region controlled by native peoples known collectively as the Anishinaabeg.. . . the research and analysis are stirring on their own. Instead of chronicling a simple Revolutionary War story that culminated a unified new nation, McDonnell’s book attempts . . . to complicate the way we understand both our country’s birth and its forebears (and, not coincidentally, its current inhabitants). We can only hope that someday our children’s children will learn about Fort Michilimackinac alongside the Old North Church.” —Kate Tuttle, The Boston Globe

“McDonnell . . . deploys impeccable research skills to challenge the ‘middle grounds’ historical interpretation of Native American–European encounters . . . With a fascinating reexamination of the political, military, and economic details of the war, as well as a stunning final chapter on the American Revolution and the meaning of (in)dependence, McDonnell admirably expands readers' understanding of ‘Indian country on its own terms.’” —Publishers Weekly

“McDonnell skillfully captures the history of the [Anishinaabeg] from the seventeenth century through the early nineteenth century, restoring the nation's legacy and filling in a vital historical link in the timeline of the Americas.” —Kirkus Reviews

“McDonnell makes a compelling case that the [Anishinaabeg] were not victims of European colonization but instead used their military and economic prowess to control and dictate how the world around them evolved.” —John R. Burch, Library Journal

“In clear and compelling prose, Michael A. McDonnell renders a complicated world accessible, a marginalized region central, and a neglected history essential. Rethinking pivotal events from indigenous centers like Michilimackinac rather than from colonial capitals like Boston or Williamsburg, Masters of Empire provides an important perspective for a richer understanding of early American history.” —Collin G. Calloway, John Kimball Jr. 1943 Professor of History, Dartmouth College

“In recent years scholars have begun to argue that the center of America’s historical gravity should shift from the East Coast to the heart of the continent. Michael A. McDonnell’s Masters of Empire makes an important contribution to that reorientation. Piecing together the story of the Anishinaabeg in general and the Odawa of Michilimackinac in particular, McDonnell offers a new perch from which to view the course of human events during the seventeenth and eighteenth centuries, thereby making a powerful case for Michilimackinac’s joining Boston, Philadelphia, and other better-known capitals vital to understanding America’s past.” —James H. Merrell, Lucy Maynard Salmon Professor of History, Vassar College

“This is a sweeping and majestic analysis of the colonial Great Lakes, which places the Odawa people at the heart of a new understanding about how the French and later the British were thwarted in their attempts to shape and control this region.” —Susan Sleeper-Smith, Professor of History, Michigan State University

“With elegant prose and a keen eye for detail, Michael A. McDonnell brings to life the dynamic world of Great Lakes Indians in the seventeenth and eighteenth centuries. This is native-centered history at its best, revealing how the Odawa and their neighbors not only controlled their own destinies in the face of colonialism but also shaped the fabric of American life for many generations. A powerful story expertly told.” —Brett Rushforth, author of Bonds of Alliance: Indigenous and Atlantic Slaveries in New France

“Insightful and evocative, Masters of Empire compels us to rethink colonial America by restoring native peoples to the center of the story. Along vast waterways in the heart of a continent, natives controlled the intrusive but weak officials and traders of distant empires. Michael A. McDonnell brilliantly recovers and deftly narrates a tale of resourceful persistence by the Anishinaabeg.” —Alan Taylor, author of The Civil War of 1812: American Citizens, British Subjects, Irish Rebels, and Indian Allies

“With lively prose and page-turning action, Michael A. McDonnell introduces readers to a whole new world. Everyone interested in American history should read this magisterial tale of how the Odawa lived through and shaped the history of North America and the early modern world.” —Kathleen DuVal, Professor of History, University of North Carolina, Chapel Hill

“Michael A. McDonnell shows that for much longer than anyone has dared to imagine, Great Lakes Indians stood firm as the masters of their own destiny—and powerfully influenced events as iconic as the American Revolution.” —Woody Holton, author of Abigail Adams

“In this tour de force, Michael A. McDonnell brilliantly shows how the Anishinaabeg of the Upper Great Lakes played a crucial role in the run-up to the American Revolution. This 'native-driven' history will send historians scurrying to revise their interpretation of imperial and native rivalries in the mid-continent west of the Appalachians.” —Gary Nash, Professor of History, University of California, Los Angeles