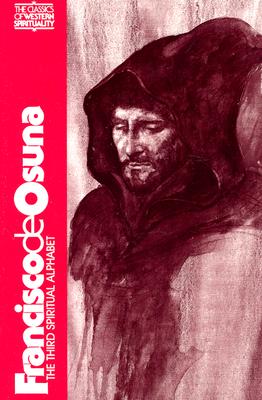 Bargains in books are rare today, but one would be hard put to find in American publishing anything superior to these in content and format. The Parish Visitor Francisco de Osuna: The Third Spiritual Alphabet translated and introduced by Mary E. Giles preface by Kieran Kavanaugh, O.C.D. Just to love the exercise of recollection is a gift from God.... Francisco de Osuna (c.1492-1540) Francisco de Osuna (c. 1492-c. 1540) was born in the Seville region of Spain on the eve of that country's golden age of mysticism that saw the sublime achievements of Teresa of Avila and John of the Cross. Osuna entered the Order of Friars Minor of the Regular Observance when Cardinal Jimenez de Cisneros was spearheading a reform movement that encouraged believers to nourish a simple, Christ-centered, inner spirituality. In the midst of the controversy over the nature of true interior prayer that raged during the 1520's between the advocates of recollection (recogimiento) and those who practiced abandon (dejamiento), Osuna wrote a series of maxims as a practical guide for recollection. These he arranged into a series of Spiritual Alphabets, the third of which appears in this volume. Long recognized for its influence on the famous Spanish Carmelites of the sixteenth century, The Third Spiritual Alphabet is itself a masterpiece of mystical literature that will richly repay those who seek its treasures. +