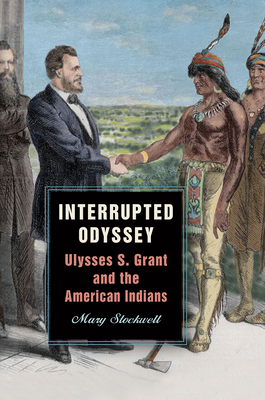 By Mary Stockwell
Email or call for price

In this first book devoted to the genesis, failure, and lasting legacy of Ulysses S. Grant’s comprehensive American Indian policy, Mary Stockwell shows Grant as an essential bridge between Andrew Jackson’s pushing Indians out of the American experience and Franklin D. Roosevelt’s welcoming them back in. Situating Grant at the center of Indian policy development after the Civil War, Interrupted Odyssey: Ulysses S. Grant and the American Indians reveals the bravery and foresight of the eighteenth president in saying that Indians must be saved and woven into the fabric of American life.

In the late 1860s, before becoming president, Grant collaborated with Ely Parker, a Seneca Indian who became his first commissioner of Indian affairs, on a plan to rescue the tribes from certain destruction. Grant hoped to save the Indians from extermination by moving them to reservations, where they would be guarded by the U.S. Army, and welcoming them into the nation as American citizens. By so doing, he would restore the executive branch’s traditional authority over Indian policy that had been upended by Jackson.

In Interrupted Odyssey, Stockwell rejects the common claim in previous Grant scholarship that he handed the reservations over to Christian missionaries as part of his original policy. In part because Grant’s plan ended political patronage, Congress overturned his policy by disallowing Army officers from serving in civil posts, abandoning the treaty system, and making the new Board of Indian Commissioners the supervisors of the Indian service. Only after Congress banned Army officers from the Indian service did Grant place missionaries in charge of the reservations, and only after the board falsely accused Parker of fraud before Congress did Grant lose faith in his original policy.

Stockwell explores in depth the ousting of Parker, revealing the deep-seated prejudices that fueled opposition to him, and details Grant’s stunned disappointment when the Modoc murdered his peace commissioners and several tribes—the Comanche, Kiowa, Cheyenne, and Sioux—rose up against his plans for them.

Though his dreams were interrupted through the opposition of Congress, reformers, and the tribes themselves, Grant set his country firmly toward making Indians full participants in the national experience. In setting Grant’s contributions against the wider story of the American Indians, Stockwell’s bold, thoughtful reappraisal reverses the general dismissal of Grant’s approach to the Indians as a complete failure and highlights the courage of his policies during a time of great prejudice.

Mary Stockwell, a retired professor of history at Lourdes University, is the author of Unlikely General: “Mad” Anthony Wayne and the Battle for America; The Other Trail of Tears: The Removal of the Ohio Indians; Woodrow Wilson: The Last Romantic; and several educational books for young people.

"In Interrupted Odyssey: Ulysses S. Grant and the American Indians, historian Mary Stockwell offers one of the finest studies of President Grant’s Indian policy and its consequences for the country to date."—Nick Sacco, H-Net Reviews

"This book provides an engaging narrative of the post-Civil War era of America’s relationship with its native population."—Steven C. Haack, The Journal of America's Military Past

“This gripping narrative shines a much-needed bright light on President Ulysses S. Grant’s hopes for the American Indians and all that went wrong with his policy. Meticulously researched, this brilliant book leaves us in the hands of a trustworthy guide. Mary Stockwell invites us into a complex, often misunderstood story filled with tragedy, irony, and courage.”—Ronald C. White, author, American Ulysses: A Life of Ulysses S. Grant

“Stockwell effectively grounds her account of President Ulysses S. Grant’s Indian policy in the long sweep of American history. Grant’s efforts at reform that relied on the army and reservation system ran up against cultural assumptions, political realities, and intractable problems. Stockwell’s deeply thoughtful and fair-minded account offers a powerful example of the tensions between aspiration and administration. Interrupted Odyssey presents an important story that is well told.”—George C. Rable, author, Damn Yankees! Demonization and Defiance in the Confederate South

“Taking a cue from Homer’s ancient epic, Stockwell’s Interrupted Odyssey takes us on a heart-wrenching journey through hope, despair, and finally faith in a better future for all American citizens, including the tribes of the Far West.”—William D. Pederson, coeditor, James Madison: Philosopher, Founder, Statesman

“Stockwell’s vivid account of Grant’s attempts to use the army, despite the protests of his general friends, to rescue the Indians from certain destruction is a forgotten piece of the Grant story and our nation’s history.”—Frank J. Williams, president of the Ulysses S. Grant Association and founding chair of the Lincoln Forum