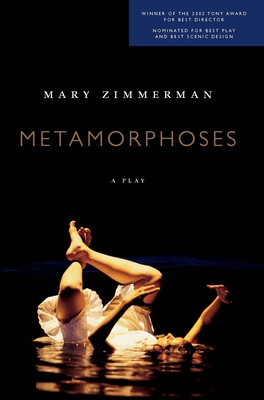 Called by Time the "theater event of the year," Mary Zimmerman's Metamorphoses brings Ovid's tales to stunning visual life. Set in and around a large pool of water onstage, Metamorphoses juxtaposes the ancient and the contemporary in both language and image to reflect the variety and persistence of narrative in the face of inevitable change. Nominated for three 2002 Tony Awards, including "Best Play," Metamorphoses earned Zimmerman a Tony for "Best Direction of a Play."

MARY ZIMMERMAN is a professor of performance studies at Northwestern University. She has adapted-directed The Notebooks of Leonardo da Vinci, The Odyssey, The Arabian Nights, Eleven Rooms of Proust, and Journey to the West. She is a MacArthur Fellowship recipient, an ensemble member of Chicago’s Lookingglass Theatre Company, and a Manilow Resident Director at the Goodman Theatre.

"Writer-director Mary Zimmerman's lovely, deeply affecting work . . . recaptures the primal allure of the theater. . . . It shows that theater can provide not just escape but sometimes a glimpse of the divine." —Time

"Funny one moment, achingly sorrowful the next, Metamorphoses somehow manages both to lift you out of the moment you're living in and speak to it with piercing directness." —Wall Street Journal

"With its emphases on love, loss and the transforming powers of memory and the imagination . . . the production has been reducing calloused New Yorkers to sobs." —New York Times