You Got Older: A Play (Paperback) 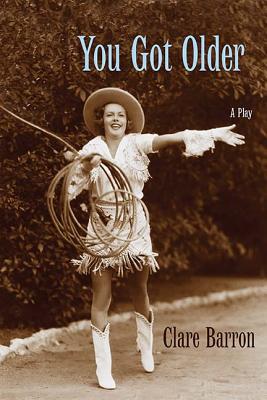 Winner of a 2015 Obie Award for Playwriting

Mae has returned home to help her father while he undergoes treatment for cancer. But she needs a little help herself. She’s just lost her boyfriend and her job. (It turns out there are consequences to dating your boss . . .) And she’s desperately craving intimacy of any sort. Mae escapes into the the arms of a chain-smoking, imaginary Cowboy who turns her on and ties her up. And she escapes into chatter with her siblings as they attempt to distract and entertain themselves in a hospital waiting room. But ultimately, it’s her deep love for her father that teaches Mae to remain optimistic and ambitious in the face of suffering and that gets her back on track.

CLARE BARRON is a playwright and actor from Wenatchee, Washington. Her playYou Got Older was produced by Page 73 in New York City in 2014. It won an Obie Award, was nominated for a Drama Desk Award for Outstanding Play, and was a finalist for the Susan Smith Blackburn Award.

"This terrific new play by Clare Barron . . . offers a hilarious and painfully affecting blend of oddball dialogue, beautifully observed family dynamics, and a preoccupation with the weird ways of the body . . . Barron’s special genius lies in the deep dividends she derives from small talk."—The New Yorker


"Clare Barron’s extraordinary You Got Older moved me as few new plays have. As a critic, I can usually shake things off fast . . . but for some time after the play’s wrenching finale, I found myself literally shaking. You Got Older beautifully captures elusive things about avoidance: It’s about the denial of death, but also the denial of living. Like a great short story, it succeeds through details that . . . coalesce with a force all the stronger for their subtlety . . . there are moments in this play that I know I won’t forget."—Time Out New York