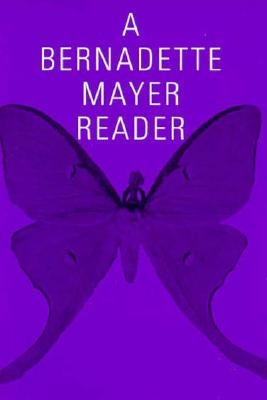 This is book number 739 in the New Directions Paperbook series.

“She writes as if Everything were still possible in the work of a lifetime at the coincidence of all the turvy moments. Better that she’s read without a thought to stop. Best so this world is found changed.” —Clark Coolidge

“What a clear, insistent health there is here––as if the so-called world were seriously the point, which it is, and we could actually live in it, which we do. Truly this is the best How To book I've read in years. Bernadette Mayer makes a various world of real people in real times and places, a fact of love and loving use. She has impeccable insight and humor. She is a consummate poet no matter what’s for supper or who eats it. Would that all genius were as generous.” —Robert Creeley

Called “a consummate poet” by Robert Creeley, Bernadette Mayer was born in Brooklyn, New York, in 1945. A most prolific poet, her first book was published at the age of twenty-three. Many texts later she continues to write progressive poetry from her home in East Nassau, New York. For many years Mayer lived and worked on the Lower East Side of Manhattan where she was the Director of St. Mark’s Poetry Project from 1980-1984. Bernadette Mayer has received grants and awards from PEN American Center, The Foundation for Contemporary Performance Art, the NEA, The Academy of American Poets, and The American Academy of Arts and Letters.