I Served the King of England (New Directions Classic) (Paperback) 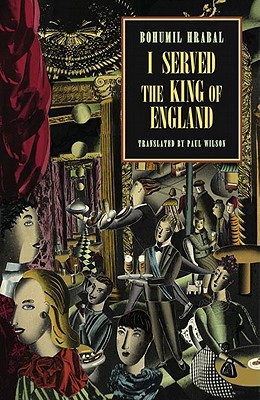 From the author of CLOSELY WATCHED TRAINS comes another tragicomic tale of Czechoslovakia during World War II. The rise and fall of a hotel waiter who never lets any sort of conscience interfere with his ambition.

In a comic masterpiece following the misadventures of a simple but hugely ambitious waiter in pre-World War II Prague, who rises to wealth only to lose everything with the onset of Communism, Bohumil Hrabal takes us on a tremendously funny and satirical trip through 20th-century Czechoslovakia.

First published in 1971 in a typewritten edition, then finally printed in book form in 1989, I Served the King of England is "an extraordinary and subtly tragicomic novel" (The New York Times), telling the tale of Ditie, a hugely ambitious but simple waiter in a deluxe Prague hotel in the years before World War II. Ditie is called upon to serve not the King of England, but Haile Selassie. It is one of the great moments in his life. Eventually, he falls in love with a Nazi woman athlete as the Germans are invading Czechoslovakia. After the war, through the sale of valuable stamps confiscated from the Jews, he reaches the heights of his ambition, building a hotel. He becomes a millionaire, but with the institution of communism, he loses everything and is sent to inspect mountain roads. Living in dreary circumstances, Ditie comes to terms with the inevitability of his death, and with his place in history.

Bohumil Hrabal (1914-1997) was born in Moravia. He is the author of such classics as Closely Watched Trains (made into an Academy-Award winning film by Jiri Menzel), The Death of Mr. Baltisberger, I Served the King of England, and Too Loud a Solitude. He fell to his death from the fifth floor of a Prague hospital, apparently trying to feed the pigeons.

This is one of Central Europe’s great hotel novels, witty and deep, set in Prague, and the city’s provincial clones. The pomp of hotel lobbies and restaurants serves as a backdrop to portray the smallness of a person caught up in the maelstrom of history, forced to scramble, bear losses, make bad judgement calls, and strike Faustian bargains.
— Calvert Journal

A joyful, picaresque story, which begins with Baron Munchausen-like adventures and ends in tears and solitude.
— James Wood - The London Review of Books

An extraordinary and subtly tragicomic novel.
— The New York Times

One of the most authentic incarnations of magical Prague, an incredible union of earthy humor and baroque imagination.
— Milan Kundera