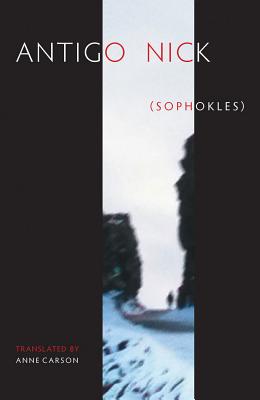 Anne Carson has published translations of the ancient Greek poets Sappho, Simonides, Aiskhylos, Sophokles and Euripides. Antigonick is her seminal work. Sophokles’ luminous and disturbing tragedy is here given an entirely fresh language and presentation. This paperback edition includes a new preface by the author, “Dear Antigone.”

Anne Carson was born in Canada and teaches ancient Greek for a living.

Carson is nothing less than brilliant—unfalteringly sharp indiction, audacious, and judicious in taking liberties.
— Publishers Weekly

She reaches past the contemporary moment to craft her unique and
universal voice, one that is both as ancient as Sappho and
intimidatingly modern.
— Washington Square News

She is one of the few writers writing in English that I would read anything she wrote.
— Susan Sontag

It is a cry of grief posed in question form, emphatic, handwritten, excessive and abbreviated and, in this sense, a measured scream that gives us some sense of who or what lives on when it is all too late.
— Judith Butler - Public Books

Her poetry is light, swift, and beautiful.
— The New Yorker

The reader, the listener is provoked and challenged to the utmost.
— The Times Literary Supplement

A beautiful, bewildering book, wondrous and a bit scary to behold, that gives a reader much to think about without making it clear how she should feel.

Ms. Carson does more than just update the language and quicken the pacing–she rewrites the play, mines its subtleties, its absurdity and its strangely comic timing and manages to produce a unique text out of a story that goes back much further than the fifth century when Sophocles wrote his version.
— The Guardian

Antigonick is as much a re-telling as it is a testament to the importance of Antigone in Western art, of re-tellings, and of refiguring narrative.

Her poetry is expressionistic (you see this in Antigonick), shot through with a spiritual turbulence and an almost violent sensitivity to experience, and the barbed edges of her lines can send shocks through you.

Her poetry at it's best, like Antigone's character, is a thrilling combination of hot-blooded instinct and dispassionate resolve.
— National Post

The experiment's a fascinating one, and this interesting, risk-taking book is unignorable.
— The Independent

Antigonick plays extensively with the conventions of narrative form, translation, and the physical presentation of literature.

This is where Carson's best work is staged: in the uncanny gateway between the temporal and the timeless; in the nick between the world of powerboats and the sublime, terrifying realm of the dead and the still lively gods.
— New Statesman

Antigonick has arrived at the right cultural moment.

Carson's Antigonick is wildly unorthodox. But it's also captivating, in a brash, pop culture-inflected way.