Stranger to the Moon (Paperback) 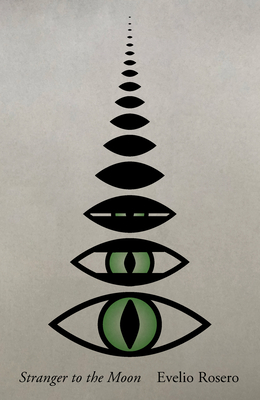 A fantastical novel about power and subservience by the great Evelio Rosero, winner of Colombia’s National Literature Prize

The renowned Colombian writer Evelio Rosero has never been one to shy away from the darker aspects of his nation’s history and society. His magnificent novel Stranger to the Moon portrays a world that seems to exist outside time and place but taps into the dark myths and collective subconscious of his country, with its harrowing inequality and violence. A parable of pointed social criticism, with naked humans imprisoned in a house in order to serve the needs of “the vicious clothed ones,” the novel describes what ensues when a single “naked one” privately rebels, risking his own death and that of his fellow prisoners. Each subsequent section of the book adds further layers to the ritualistic and bizarre social order inhabited by its characters. Insects and reptiles are trained as agents and spies against the naked ones, and only the most fortunate humans manage to reach old age by taking up strategic spots near the kitchens and grabbing for the fiercely contested food. Stranger to the Moon is a brave, powerful, and distinctive novel by a writer who arguably holds the strongest claim to the title of Colombia’s greatest living author.

Evelio Rosero, born in Bogotá, Colombia in 1958, is the author of several books of fiction—novels and short stories—plays, and poetry. For his body of work he was awarded Colombia’s National Literature Prize by the Ministry of Culture. The Armies won the prestigious Tusquets International Prize and has been longlisted for The Independent Foreign Fiction Prize.

Anne McLean lives in Toronto and has translated the works of authors including Javier Cercas, Julio Cortázar, and Juan Gabriel Vásquez, and Enrique Vila-Matas.

Victor Meadowcroft is based in Brighton, England, and translates from the Spanish and Portuguese.

The translation of Good Offices (2011) is sublime. Moving from offbeat humor to soaring spritual ecstasy, it has both pathos and punch.
— Maya Jaggi - The Guardian

The Armies is a disturbing allegory of life during wartime, in which little appears to happen while at the same time entire lives and worlds collapse.
— (London) Times

Throughout, Rosero’s prose, translated with lyricism by McLean, conveys the characters’ horrifying human nature with aplomb (on the clothed: “they arrive sometimes like a fantastic whirlwind, whooping with excitement, and at other times with heads bowed, as if already repenting of the great error they wish to commit”). Disturbing and powerful, this one is hard to forget.
— Publishers Weekly

Recalling the work of Kafka and de Sade, a nightmarish fable explores timeless questions about violence and subjugation, power and freedom...Rosero packs great depth within a brief novel through brisk chapters that can change tone as the ambivalent narrator wavers among resentment, anger, and defeat. Though the world of this story is bleak—sometimes almost unbearably so—the narrator’s soliloquies on agency in the midst of captivity and degradation are timeless, haunting, and extremely powerful. A profound work of dark and brutal truth.
— Kirkus (starred review)

This is a hallucinatory read, brief and bizarre, and yet the murky boundaries, pathological masochism, and fascistic pull toward brutality it depicts tap into a frighteningly familiar human need to destroy—one we’ve seen reflected in the political realities of the twentieth and twenty-first centuries.
— Rhian Sasseen - The Paris Review