Sick in the Head: Conversations About Life and Comedy (Paperback) 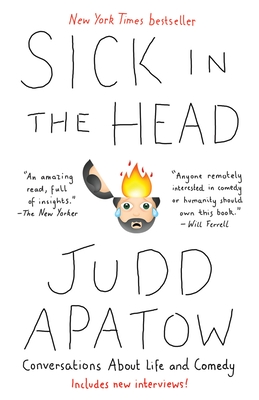 NEW YORK TIMES BESTSELLER • NAMED ONE OF THE BEST BOOKS OF THE YEAR BY THE A.V. CLUB • Includes new interviews!

From the writer and director of Knocked Up and the producer of Freaks and Geeks comes a collection of intimate, hilarious conversations with the biggest names in comedy from the past thirty years—including Mel Brooks, Jerry Seinfeld, Jon Stewart, Sarah Silverman, Harold Ramis, Seth Rogen, Chris Rock, and Lena Dunham.

Before becoming one of the most successful filmmakers in Hollywood, Judd Apatow was the original comedy nerd. At fifteen, he took a job washing dishes in a local comedy club—just so he could watch endless stand-up for free. At sixteen, he was hosting a show for his local high school radio station in Syosset, Long Island—a show that consisted of Q&As with his comedy heroes, from Garry Shandling to Jerry Seinfeld. They talked about their careers, the science of a good joke, and their dreams of future glory (turns out, Shandling was interested in having his own TV show one day and Steve Allen had already invented everything).

Thirty years later, Apatow is still that same comedy nerd—and he’s still interviewing funny people about why they do what they do.

Sick in the Head gathers Apatow’s most memorable and revealing conversations into one hilarious, wide-ranging, and incredibly candid collection that spans not only his career but his entire adult life. Here are the comedy legends who inspired and shaped him, from Mel Brooks to Steve Martin. Here are the contemporaries he grew up with in Hollywood, from Spike Jonze to Sarah Silverman. And here, finally, are the brightest stars in comedy today, many of whom Apatow has been fortunate to work with, from Seth Rogen to Amy Schumer. And along the way, something kind of magical happens: What started as a lifetime’s worth of conversations about comedy becomes something else entirely. It becomes an exploration of creativity, ambition, neediness, generosity, spirituality, and the joy that comes from making people laugh.

Loaded with the kind of back-of-the-club stories that comics tell one another when no one else is watching, this fascinating, personal (and borderline-obsessive) book is Judd Apatow’s gift to comedy nerds everywhere.

Praise for Sick in the Head

“An essential for any comedy geek.”—Entertainment Weekly

“Fascinating . . . a collection of interviews with many of the great figures of comedy in the latter half of the twentieth century.”—The Washington Post

“Open this book anywhere, and you’re bound to find some interesting nugget from someone who has had you in stitches many, many times.”—Janet Maslin, The New York Times

“An amazing read, full of insights and connections both creative and interpersonal.”—The New Yorker

“Anyone even remotely interested in comedy or humanity should own this book.”—Will Ferrell

Judd Apatow is one of the most important comic minds of his generation. He wrote and directed the films The 40-Year-Old Virgin (co-written with Steve Carell), Knocked Up, Funny People, and This Is 40, and his producing credits include Superbad, Bridesmaids, and Anchorman. Apatow is the executive producer of HBO’s Girls. He was also the executive producer of Freaks and Geeks, created Undeclared, and co-created the Emmy Award–winning television program The Ben Stiller Show. His latest film is Trainwreck. He was also the editor of the collection I Found This Funny. Judd Apatow lives in Los Angeles with his wife, Leslie Mann, and their two daughters, Maude and Iris.

“An essential for any comedy geek.”—Entertainment Weekly

“Fascinating . . . a collection of interviews with many of the great figures of comedy in the latter half of the twentieth century.”—The Washington Post

“Open this book anywhere, and you’re bound to find some interesting nugget from someone who has had you in stitches many, many times.”—Janet Maslin, The New York Times

“An amazing read, full of insights and connections both creative and interpersonal.”—The New Yorker

“For fans of stand-up, Sick in the Head is a Bible of sorts.”—Newsweek

“This exploration of what it really means to be funny, day in and day out, is for the comedian in everyone.”—Publishers Weekly (starred review)

“If Apatow’s gift for comedy is a sickness, may he never be cured.”—Playboy

“Sprawling and insightful . . . The candidness of the interviews also exposes the peculiar community of comedians with anecdotes and cameos unlikely to be heard elsewhere. A delightful and hilarious read for anyone interested in what makes comedians tick.”—Kirkus Reviews

“These are wonderful, expansive interviews—at times brutal, at times breathtaking—with artists whose wit, intelligence, gaze, and insights are all sharp enough to draw blood. Judd Apatow understands as well as any of them the pain that holds the knife, and the glee that wields it.”—Michael Chabon

“Anyone even remotely interested in comedy or humanity should own this book. It is hilarious and informative and it contains insightful interviews with the greatest comics, comedians, and comediennes of our time. My representatives assure me I will appear in a future edition.”—Will Ferrell