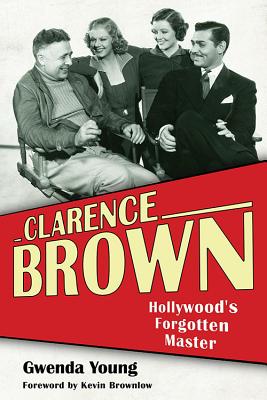 By Gwenda Young, Kevin Brownlow (Foreword by)
$39.95
Possibly out of print. Email or call to check availability and price.

Greta Garbo proclaimed him as her favorite director. Actors, actresses, and even child stars were so at ease under his direction that they were able to deliver inspired and powerful performances. Academy--Award--nominated director Clarence Brown (1890--1987) worked with some of Hollywood's greatest stars, such as Clark Gable, Joan Crawford, Mickey Rooney, Katharine Hepburn, and Spencer Tracy. Known as the "star maker," he helped guide the acting career of child sensation Elizabeth Taylor (of whom he once said, "she has a face that is an act of God") and discovered Academy--Award--winning child star Claude Jarman Jr. for The Yearling (1946). He directed more than fifty films, including Possessed (1931), Anna Karenina (1935), National Velvet (1944), and Intruder in the Dust (1949), winning his audiences over with glamorous star vehicles, tales of families, communities, and slices of Americana, as well as hard-hitting dramas. Although Brown was admired by peers like Jean Renoir, Frank Capra, and John Ford, his illuminating work and contributions to classic cinema are rarely mentioned in the same breath as those of Hollywood's great directors.

In this first full-length account of the life and career of the pioneering filmmaker, Gwenda Young discusses Brown's background to show how his hardworking parents and resilient grandparents inspired his entrepreneurial spirit. She reveals how the one--time engineer and World War I aviator established a thriving car dealership, the Brown Motor Car Company, in Alabama -- only to give it all up to follow his dream of making movies. He would not only become a brilliant director but also a craftsman who was known for his innovative use of lighting and composition.

In a career spanning five decades, Brown was nominated for five Academy Awards and directed ten different actors in Oscar-nominated performances. Despite his achievements and influence, however, Brown has been largely overlooked by film scholars. Clarence Brown: Hollywood's Forgotten Master explores the forces that shaped a complex man -- part--dreamer, part--pragmatist -- who left an indelible mark on cinema.

Gwenda Young is a professor of film history and lecturer in film studies at University College, Cork, Ireland. She is the author of numerous articles about film history, including three articles about Clarence Brown, and co-editor of two books of critical essays. In 2003, along with Kevin Brownlow, she curated a retrospective of Brown's films at the National Film Theatre, London.