The Internet of Elsewhere: The Emergent Effects of a Wired World (Hardcover) 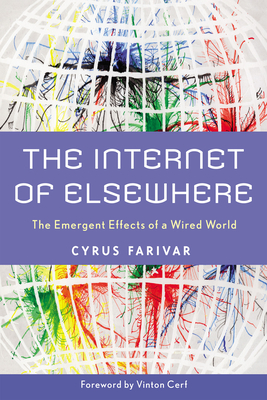 By Cyrus Farivar
$28.95
Possibly out of print. Email or call to check availability and price.

Through the lens of culture, The Internet of Elsewhere looks at the role of the Internet as a catalyst in transforming communications, politics, and economics. Cyrus Farivar explores the Internet's history and effects in four distinct and, to some, surprising societies—Iran, Estonia, South Korea, and Senegal. He profiles Web pioneers in these countries and, at the same time, surveys the environments in which they each work. After all, contends Farivar, despite California's great success in creating the Internet and spawning companies like Apple and Google, in some areas the United States is still years behind other nations.

Surprised? You won't be for long as Farivar proves there are reasons that:

The Internet of Elsewhere brings forth a new complex and modern understanding of how the Internet spreads globally, with both good and bad effects.

"An essential book for thought-provoking summer reading. In The Internet of Elsewhere, technology journalist Cyrus Farivar explores the role of the internet as a social, political and economic catalyst through compelling case studies from four unexpected countries: Iran, Estonia, South Korea, and Senegal."

"Cyrus Farivar's skill as a perceptive analyst and captivating storyteller let us see the future of a connected world through his seasoned eyes."
— Ethan Zuckerman

"Cyrus Farivar, a great friend of Estonia, has chronicled my country's recent and unprecedented technological history with this exceptional book. He understands not only what Estonia can teach the rest of the world but, moreover, he makes the insightful case for the necessity of modern global citizens to understand crucial Internet issues."
— The Honorable President Toomas Hendrik Ilves

"There's nothing like a good shot of clear-eyed, upbeat globalism to shatter the dreary national myopia and restore our sense of wonder about what really is an amazing contemporary world. Cyrus Farivar's new book provides just such an injection of multicultural journalisitic insight."

"Cyrus Farivar has written a brilliant first book. He has the thoughtful pen of a novelist, the observational zeal of an investigative journalist, and the insight of an experienced technologist."
— Karim Sadjadpour