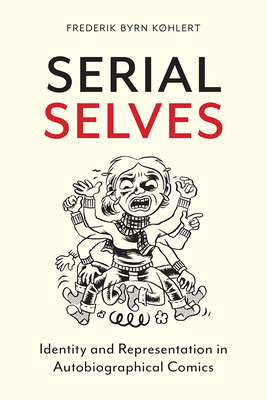 By Frederik Byrn Køhlert
$30.95
Possibly out of print. Email or call to check availability and price.

Autobiography is one of the most dynamic and quickly-growing genres in contemporary comics and graphic narratives. In Serial Selves, Frederik Byrn Køhlert examines the genre’s potential for representing lives and perspectives that have been socially marginalized or excluded. With a focus on the comics form’s ability to produce alternative and challenging autobiographical narratives, thematic chapters investigate the work of artists writing from perspectives of marginality including gender, sexuality, disability, and race, as well as trauma. Interdisciplinary in scope and attuned to theories and methods from both literary and visual studies, the book provides detailed formal analysis to show that the highly personal and hand-drawn aesthetics of comics can help artists push against established narrative and visual conventions, and in the process invent new ways of seeing and being seen.

As the first comparative study of how comics artists from a wide range of backgrounds use the form to write and draw themselves into cultural visibility, Serial Selves will be of interest to anyone interested in the current boom in autobiographical comics, as well as issues of representation in comics and visual culture more broadly.

FREDERIK BYRN KØHLERT is a lecturer in the School of Art, Media, and American Studies at the University of East Anglia in Norwich, United Kingdom. He is the author of The Chicago Literary Experience: Writing the City, 1893-1953.

"In this engrossing and tremendously insightful book, Køhlert deftly analyzes comics as a visual form with the precision of a surgeon’s scalpel, paying close attention to the myriad ways comics authors use the formal elements unique to comics to express meaning and embody their intentions. By discussing these five authors in concert, Køhlert not only sheds new light on their individual works, but he also points to the potential for the medium to serve as a powerful vehicle to represent issues around the body. This is an invaluable text for anyone teaching comics."
— Nick Sousanis

"Serial Selves leaps past the existing scholarship on autobiographical comics, bringing a fuller sense of context and more diverse corpus. Persistently, and brilliantly, Køhlert reminds us that the choice between formal rigor and social engagement is a false one, and that comics studies at its best achieves both. Synthesizing a tremendous range of research—from autobiography theory, trauma theory, gender studies, disability studies, and other fields—he approaches neglected or misunderstood works, asks tough questions, and, in every case, uses close formal analysis to unpack issues of subjectivity and identity formation. A watershed work."
— Charles Hatfield

"This book offers a rich and varied set of positions through which this new revolution can be understood and celebrated, and should be of value and interest to readers approaching it from disparate positions."
— The European Journal of Life Writing

"A lovely, insightful, and markedly entertaining read as well as a promising place for scholars interested in marginalized identities and autobiographical comics to begin. The blend of context, formal critique, intersectional scholarship, and intentionally limited scope is an admirable accomplishment."
— Inks: The Journal of the Comics Studies Society

"The possibilities of comics as an avenue for visibility and accurate representation are repeated themes throughout Køhlert’s deep and thoughtful analysis of each author-artists’ work in Serial Selves. The result is a book written with the enthusiasm of pop culture lovers and underground comics fans, but useful in fields and interests beyond those boundaries."
— Communication Booknotes Quarterly

"Analyzes the ways in which minority artists create illustrations, and the context and messaging behind the images created in a broader sense....Graduate students, scholars and professionals interested in comics and the media might find this book to be a helpful tool."
— Communication Booknotes Quarterly

"Serial Selves contributes to a now established scholarly field of life writing within comics studies....Through detailed formal analysis, Kohlert's work carefully examines the highly visual nature of living in a marginalised body. The book brings attention to the various ways in which authors engage directly with their visual selves and challenge conventional representational schemes."
— Journal of Graphic Novels and Comics

"Køhlert has a very clear and accessible writing style, advantageous in discussing the theory associated with the various case studies, rendering the complex readily explicable. He covers the work of the major comics thinkers in a seamless fashion, so that when it comes to the discussion of the authors in their case studies, the reader is fully prepared in terms of the overarching theoretical framework. Køhlert impresses further in each of the case studies, as he is also able to address the theory relating to disability, feminist and queer issues amongst others. He moves easily from theory to the analysis of the detail of the comics he studies in a clear and lucid way."
— European Comic Art