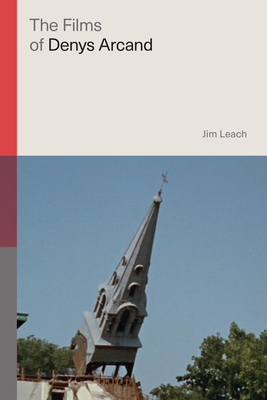 By Jim Leach
$29.95
Possibly out of print. Email or call to check availability and price.

Denys Arcand is best known outside Canada for three films that were nominated for Academy Awards for Best Foreign-Language Film: The Decline of the American Empire (1986), Jesus of Montreal (1989), and The Barbarian Invasions (2003), the last of which won the Award. Yet Arcand has been making films since the early 1960s. When he started making films, Quebec was rapidly transforming from a relatively homogeneous community, united by its Catholic faith and French language and culture, into a more fragmented modern society. The Films of Denys Arcand sheds light on how Arcand addressed the impact of these changes from the 1960s, when the long-drawn-out debate on Quebec's possible separation from the rest of Canada began, to the present, in which the traditional cultural heritage has been further fragmented by the increasing presence of diasporic communities. His career and films offer an ideal case study for exploring the contradictions and tensions that have shaped Quebec cinema and culture in a period of increasing globalization and technological change.

JIM LEACH is professor emeritus in the Department of communication, popular culture and film at Brock University in St. Catharines, Ontario, Canada. He is the author of books on filmmakers Alain Tanner and Claude Jutra, as well as British Film (Cambridge University Press, 2004) and Film in Canada (Oxford University Press, 2005. 2011). He has also published a monograph on Doctor Who (Wayne State University Press, 2009), co-edited anthologies on Canadian documentary films and heist films, and developed a Canadian edition of an introductory film studies textbook.

"Jim Leach knows Quebec cinema incredibly well, and this book is a terrific introduction to that tradition through one of its most important filmmakers. The close analyses of Arcand's documentaries are especially welcome. Readers who know Arcand's feature films since The Decline of the American Empire will also learn a great deal about those films as well as Arcand's overall feature-film corpus, which goes back to the early 1970's."
— Jerry White

"Jim Leach proves a sure-footed guide to an enigmatic filmmaker whose long career 'has spanned the entire history of modern Quebec cinema.' The detailed treatment of every entry in Arcand’s eclectic filmography contextualizes each work according to genre, production history, and moment in time. Leach’s book is especially strong in its consideration of Arcand’s films in relation to the culture and politics of Quebec, and in the ways the films cite, reflect, and comment on each other."
— David Pike

"This is a clear and comprehensive introduction to the texts and contexts of one of Quebec and Canada's leading film directors, bringing out his significance via insightful readings of his works in terms of both their national and international dimensions."
— William Marshall

"Skilfully presented by Leach who then goes on to examine Arcand’s films chronologically from his time at the National Film Board, where his documentary work proved at times too challenging for his paymasters....Leach is a perceptive and sympathetic critic."
— British Journal of Canadian Studies