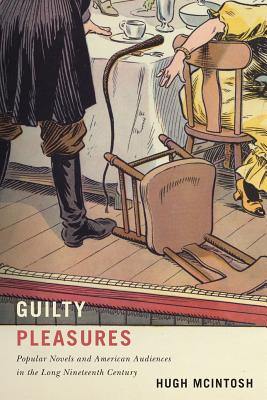 By Hugh McIntosh
Email or call for price.
Not in stock. Available To Order.

Guilty pleasures in one's reading habits are nothing new. Late-nineteenth-century American literary culture even championed the idea that popular novels need not be great. Best-selling novels arrived in the public sphere as at once beloved and contested objects, an ambivalence that reflected and informed America's cultural insecurity. This became a matter of nationhood as well as aesthetics: the amateurism of popular narratives resonated with the discourse of new nationhood.

In Guilty Pleasures, Hugh McIntosh examines reactions to best-selling fiction in the United States from 1850 to 1920, including reader response to such best-sellers as Uncle Tom's Cabin, Ben Hur, and Trilby as well as fictional representations--from Trollope to Baldwin--of American culture's lack of artistic greatness. Drawing on a transatlantic archive of contemporary criticism, urban display, parody, and advertising, Guilty Pleasures thoroughly documents how the conflicted attitude toward popular novels shaped these ephemeral modes of response. Paying close attention to this material history of novel reading, McIntosh reveals how popular fiction's unique status as socially saturating and aesthetically questionable inspired public reflection on what it meant to belong to a flawed national community.

Hugh McIntosh is an independent researcher.