Fulfilling the Promise: Virginia Commonwealth University and the City of Richmond, 1968-2009 (Hardcover) 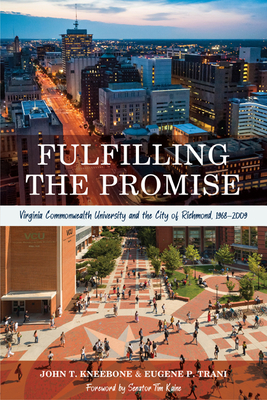 Founded in Richmond in 1968, Virginia Commonwealth University (VCU) began with a mission to build a university to serve a city emerging from the era of urban crisis--desegregation, white flight, political conflict, and economic decline. With the merger of the Medical College of Virginia and the Richmond Professional Institute into the single state-mandated institution of VCU, the two entities were able to embrace their mission and work together productively.

In Fulfilling the Promise, John Kneebone and Eugene Trani tell the intriguing story of VCU and the context in which the university was forged and eventually thrived. Although VCU's history is necessarily unique, Kneebone and Trani show how the issues shaping it are common to many urban institutions, from engaging with two-party politics in Virginia and African American political leadership in Richmond, to fraught neighborhood relations, the complexities of providing public health care at an academic health center, and an increasingly diverse student body. As a result, Fulfilling the Promise offers far more than a stale institutional saga. Rather, this definitive history of one urban-setting state university illuminates the past and future of American public higher education in the post-1960s era.