Getting to the Heart of the Matter: My 36 Years in the Senate (Hardcover) 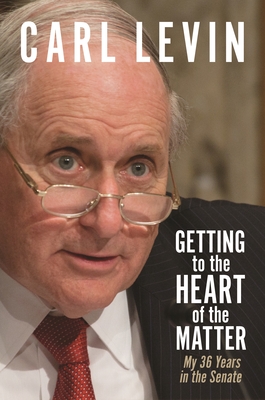 Representing Michigan for thirty-six years in the U.S. Senate, Carl Levin, the longest-serving senator in Michigan history, was known for his dogged pursuit of the truth, his commitment to holding government accountable, and his basic decency. Getting to the Heart of the Matter: My 36 Years in the Senate is his story - from his early days in Detroit as the son of a respected lawyer to the capstone of his career as chair of both the Senate Armed Services Committee and the Senate Permanent Subcommittee on Investigations. Levin's career placed him at the center of some of our nation's most critical points in modern times: from the aftermath of the 1967 Detroit riots, to the Clinton impeachment, through 9/11 and the wars in Iraq and Afghanistan, and the 2008 financial crisis. He met with numerous world leaders, including Egypt's Anwar Sadat and China's Jiang Zemin. Getting to the Heart of the Matter recounts Levin's experiences, thoughts, and actions during these historic moments.

Consisting of seventeen chapters, the book takes the reader through Levin's early life in Detroit of the 1940s, 50s, and 60s where he met his wife, started a family, practiced law and served as the first General Counsel for the newly created Michigan Civil Rights Commission and the chief appellate defender for Detroit's Legal Aid Office. Elected to the Detroit City Council in 1969, where Levin served for eight years including four as Council president, the book describes how his fight against the Department of Housing and Urban Development's devastating housing practices in the neighborhoods of Detroit led him to run for the U.S. Senate with a pledge to make government work more effectively. Winning election six times, Levin had an illustrious career in the Senate where he challenged leaders in government and the private sector for the greater good of the nation. Levin describes how, as a Democrat, throughout his time in the Senate, he worked with Republican senators who often held different policy positions in order to find common ground to achieve national goals, and how he and his Senate staff searched for creative solutions to trade issues, support for the auto industry and manufacturing sector, U.S. military action in Iraq and Afghanistan, and efforts to protect the Great Lakes and the environment, among many other issues. Levin's hope in writing this memoir is that by sharing his deeply held beliefs about the responsibility of elected officials, the book will serve as a resource for people beginning a career in, or contemplating running for, public office. Readers with an interest in politics, history, facts, and perseverance will find kinship in this book.

Carl Levin served forty-four years in public office. His seat in the Senate and his committee leadership positions from 1979 to 2015 placed him at the center of many of our country's most consequential issues.