The Folklore of the Freeway: Race and Revolt in the Modernist City (A Quadrant Book) (Paperback) 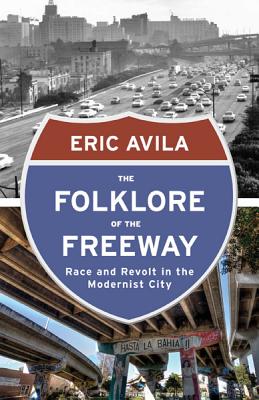 When the interstate highway program connected America’s cities, it also divided them, cutting through and destroying countless communities. Affluent and predominantly white residents fought back in a much heralded “freeway revolt,” saving such historic neighborhoods as Greenwich Village and New Orleans’s French Quarter. This book tells of the other revolt, a movement of creative opposition, commemoration, and preservation staged on behalf of the mostly minority urban neighborhoods that lacked the political and economic power to resist the onslaught of highway construction.

Within the context of the larger historical forces of the 1960s and 1970s, Eric Avila maps the creative strategies devised by urban communities to document and protest the damage that highways wrought. The works of Chicanas and other women of color—from the commemorative poetry of Patricia Preciado Martin and Lorna Dee Cervantes to the fiction of Helena Maria Viramontes to the underpass murals of Judy Baca—expose highway construction as not only a racist but also a sexist enterprise. In colorful paintings, East Los Angeles artists such as David Botello, Carlos Almaraz, and Frank Romero satirize, criticize, and aestheticize the structure of the freeway. Local artists paint murals on the concrete piers of a highway interchange in San Diego’s Chicano Park. The Rondo Days Festival in St. Paul, Minnesota, and the Black Archives, History, and Research Foundation in the Overtown neighborhood of Miami preserve and celebrate the memories of historic African American communities lost to the freeway.

Bringing such efforts to the fore in the story of the freeway revolt, The Folklore of the Freeway moves beyond a simplistic narrative of victimization. Losers, perhaps, in their fight against the freeway, the diverse communities at the center of the book nonetheless generate powerful cultural forces that shape our understanding of the urban landscape and influence the shifting priorities of contemporary urban policy.

Eric Avila is associate professor of history, Chicano studies, and urban planning at UCLA. He is the author of Popular Culture in the Age of White Flight: Fear and Fantasy in Suburban Los Angeles.

"Eric Avila's in-depth research and his sheer passionate commitment to the subject should make this one of the rare books that succeeds in replacing a widely-accepted narrative." —Robert Fishman, University of Michigan

"A must-read cultural history of the 'invisible freeway revolts' through which city people of color have demanded social justice in the midst of aggressive urban reforms. Avila provides timely lessons for scholars and urban planners, pointing us to pay closer attention to the aesthetic and expressive forms of these protests, so necssary to achieve spatial justice in American cities." —Arlene Davila, New York University

"The Folklore of the Freeway fuses art and public policy in a graceful narrative."—KCET- LA Letters

"Each chapter is rich with details rarely considered, challenging readers to rethink their understanding of growth and development"—CHOICE

"Avila’s book is critically important for placing communities of color at the center of the narrative of anti-highway activism. In showing us that culture is affected by political activities like highway construction, he makes a welcome intervention into a historical topic that has often ignored culture and suggests areas for further research."—American Studies Journal

"Avila’s work is an important history of the modernist city and its discontents, transforming the narrative of the freeway revolt."—Journal of American History

"Eric Avila . . . has written a thoughtful account of the impact of the construction of the American Interstate highway system on the urban barrios and ghettos it often traversed."—Traditional Dwellings and Settlements Review

"The Folklore of the Freeway makes the invisible freeway revolt not only visible, but vivid, clear, and indisputable."—Buildings & Settlements

"The Folklore of the Freeway offers a provocative account of the cultural history of the freeway in the American city, which interweaves past and present into a compelling narrative that challenges urban scholars to rethink the basic points of reference that have framed the storyline of the freeway revolt."—Urban Studies

"Avila’s book serves not only as a reminder of the role that race and political power played in the placement of urban highways, but as call to remake the highway system more justly."—Planning Perspectives