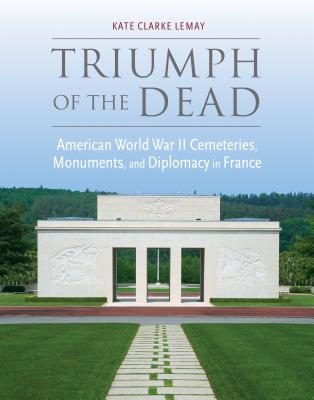 By Kate Clarke Lemay
$54.95
Possibly out of print. Email or call to check availability and price.

An investigation into the relationship between history, art, architecture, memory, and diplomacy.

Between 1948 and 1956, the United States government planned an enormous project to build fourteen permanent overseas military cemeteries in Europe. These park-like burial grounds eventually would hold the graves of approximately 80,000 American soldiers and nurses who died during or immediately after World War II. Five of these cemeteries are located in France, more than any other nation: two in Normandy; one in Provence; and two in Lorraine.

In Triumph of the Dead: American World War II Cemeteries, Monuments, and Diplomacy in France, Kate Clarke Lemay explores the relationship between art, architecture, war memory, and Franco-American relations. She addresses the many functions, both original and more recent, that the American war cemeteries have performed, such as: war memorials, diplomatic gestures, Cold War political statements, prompts for debate about Franco-American relations, and the nature of French identity itself. Located on or near former battlefields, the American war cemeteries are at once history lessons, sites of memory, and commemorative monuments. As places of mourning, war cemeteries are considerably different than civic cemeteries in their rituals, designs, and influences on collective memory. As transatlantic sites, the cemeteries both construct and sustain an American memory of World War II for a Francophile and European audience.

The book features ten color photographs, fifty black and white photographs, and four maps. Scholars as well as enthusiasts of World War II history, mid-century art and architecture, and cultural diplomacy will be interested in reading this richly researched book, the first in-depth history of some of the most important sites of American World War II remembrance.

Kate Clarke Lemay is a historian at the National Portrait Gallery, Smithsonian Institute, Washington, DC. Her research honors include an IIE Fulbright research grant and two grants from the Terra Foundation in American Art.

"Impressively researched and with the keen eye of an art historian, Lemay’s analysis is nicely contextualized within the tangled layers of American, French, and Cold War political and cultural history. Triumph of the Dead was clearly a labor of love for Lemay and it shows."
—H-War, H-Net Reviews

"[Triumph of the Dead is . . .] a richly researched book sound in its understanding of how commemorative monuments inform our collective memory."
—Journal of Military History

"Overall, the book provides a much-needed starting-point for understanding these sites of contested history, which have for too long been overlooked in scholarship on cemeteries and public monuments. Lemay’s text has the potential to set into motion interesting discussions on the role of cemeteries as political apparatuses."
—Public Art Dialogue

“Triumph of the Dead provides much needed information on post–WWII American military cemeteries in Europe, as well as the US agenda in postwar Europe in general.”
—Erika Doss, author of Memorial Mania: Public Feeling in America

“Using her formidable skills as both art and cultural historian, Kate Clarke Lemay has written a highly significant, path breaking book about American World War II cemeteries and monuments. Her study is at once a rich cultural analysis of collective memory and a formal history of memorial art design.   Lemay treats the history of Norman war cemeteries as a window into both American and French collective memories, weaving the two together into a masterful narrative. On the one hand, we learn that United States Graves Commission sought to sanitize war realities and create an image of unified American sacrifice. On the other hand, we come to understand how local Normans used these same cemeteries to grieve their own war dead and heal wartime traumas. We also come to appreciate the complexity of memorial aesthetics, including the intricacies of battle maps in American war cemeteries. Ultimately Lemay is able to link these issues of collective memory to international relations between the United States, France and Germany. Triumph of the Dead is elegantly written and meticulously-researched. It deserves a wide audience not only among historians and critics, but also anyone interested in D-Day and its memorialization.”
—Mary Louise Roberts, Distinguished Lucie Aubrac and Plaenert-Bascom Professor of History, University of Wisconsin Madison

“Impressively researched and with the keen eye of an art historian, Lemay’s analysis is nicely contextualized within the tangled layers of American, French, and Cold War political and cultural history. Triumph of the Dead was clearly a labor of love for Lemay and it shows.”
—H-War / H-Net Review


“Overall, Lemay’s book, with its in-depth research, is a rich addition to the field of memory studies. It opens up new avenues of study and positions American art in a truly international context. Interdisciplinarity is always a tough balancing act, but scholars will benefit immensely from Lemay’s field work in France and from her nuanced analysis of these significant sites.”
—Panorama