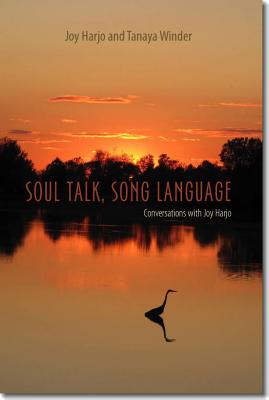 Intimate and illuminating conversations with one of America's foremost Native artists

Joy Harjo is a poet-healer-philosopher-saxophonist, and one of the most powerful Native American voices of her generation. She has spent the past two decades exploring her place in poetry, music, dance/performance, and art. Soul Talk, Song Language gathers together in one complete collection many of these explorations and conversations. Through an eclectic assortment of media, including personal essays, interviews, and newspaper columns, Harjo reflects upon the nuances and development of her art, the importance of her origins, and the arduous reconstructions of the tribal past, as well as the dramatic confrontation between Native American and Anglo civilizations. Harjo takes us on a journey into her identity as a woman and an artist, poised between poetry and music, encompassing tribal heritage and reassessments and comparisons with the American cultural patrimony. She presents herself in an exquisitely literary context that is rooted in ritual and ceremony and veers over the edge where language becomes music.

JOY HARJO became the first Native American to be named Poet Laureate of the United States in 2019. She is a multitalented artist of the Mvskoke/Creek Nation. She is an internationally known poet, performer, writer, and musician. She has published seven books of acclaimed poetry including She Had Some Horses, In Mad Love and War, The Woman Who Fell from the Sky, and How We Became Human: New and Selected Poems. She has produced five award-winning albums of music and poetry including Letter from the End of the Twentieth Century, Winding through the Milky Way, and Red Dreams: A Trail Beyond Tears. She lives in Albuquerque, New Mexico. TANAYA WINDER is a poet from the Duckwater Shoshone and Southern Ute nations. She is pursuing an MFA in poetry from University of New Mexico and working on her first collection of poetry. LAURA COLTELLI is a professor of American literature at the University of Pisa, Italy. Her publications include Winged Words, American Indian Writers Speak, and an edited collection of essays, Reading Leslie Marmon Silko.